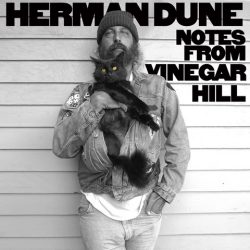 Opener ‘Say You Love Me’ sets the scene perfectly – channelling a Dylan vibe circa ‘Lay Lady Lay’ –  heavy on the echo with a vocal that feels authentic and road-used. The horns fill the sound out – a glorious opening – rough and ready but magnificent. ‘ Heartbroken and Free’ follows with a ghostly, playful vibe. All doo-wop backing and barrelhouse piano and just a hint of ‘The Trail of the Lonesome Pine’!

David Ivar, for he is Herman Dune, plays all the instruments bar the pedal steel and horns giving this album a do it yourself flavour that seeps through the cuts but never undermines the quality of the songs or songwriting. There is a real Catskills flavour to this work despite being recorded in California, mixed in Oregon and mastered in London, reminding this reviewer of both The Band and The Felice Brothers – playful, mournful and filled with the joys and despairs of life. ‘Freak Out Til The Morning Dew’ is the epitome of this with its shuffling beat, grizzled guitar lines and humour laden lyricism. ‘The Ballad of Herman Dune’ tips its hat to the influences by name-checking ‘The Basement Tapes’. There are hints of Phosphorescence in ‘LA Blues’, ‘Vinegar Hill’ features a delightful duet with Caitlin Rose, ‘Scorpio Rising’ is a pedal-driven love song of sorts perhaps a pean to the joys of water.

There is no escaping the sense of an album perhaps preserved in amber from the end of the sixties/ start of the seventies but this should not be seen as a criticism – there is an innocence in some of the writing and a sense of capturing a mood rather than a production. The album is dedicated to David Berman and that alone carries weight but more than that there is a creativity and humanity at work here that rewards both the casual and committed listener. Loved it.

Cracking locked down album from serial collaborator and songwriter