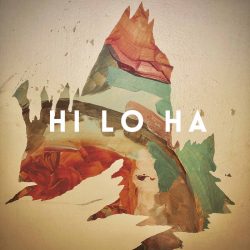 This San Francisco based band take their name from the Woodstock home that Bob Dylan lived in when writing the songs that became the classic ‘Highway 61 Revisited’ album. It’s a cool name but that’s about where any comparisons with Dylan and his music stop. Hi Lo Ha are an Indie Rock band with the occasional nod towards Alt Country and this is their third EP release. It’s difficult to get much of a read on a band from an EP and it’s interesting that this seems to be Hi Lo Ha’s preferred format for recording, given that they’ve put out three EPs at roughly two year intervals since 2013 without recording a longer release. Does this mean that they’re not particularly prolific as writers or that they’re that bit more perfectionist than most?

There are five tracks on this EP and the first ‘Cold Weather Clothes’ gets things off to a pretty good start. It’s like a rockier Fleet Foxes, full of shimmering guitar and clever little trills and runs, with the guitar and keyboards playing off each other. The vocal harmonies are quite good too and it’s quickly apparent that this band is a very tight unit. The band were, apparently, put together by friends Ben Reisdorph and Brian Davis who originally shared guitar duties – but in 2015 original bass player James Smith quit the band and this brought about an interesting shift, with Brian Davis moving to bass guitar and William Rusert coming into the band on keyboards and guitar. This paved the way for the interesting guitar and keyboard relationship that’s now front and centre in the band’s sound, while also bringing in more melodic bass lines. The band line up is completed by drummer James Fisher.

Musically the band are impressive. The guitar/keyboards interplay is creative and catchy and makes for some very interesting textures in these songs. The bass is also much more of a lead instrument in some of the arrangements – on the third track, ‘Guest List,’ the bass lays down a particularly good riff that keeps this slower track moving well and gives the other instruments a solid foundation to move out from. Where the band are distinctly lacking is the lyrical content of their songs. Many of these tracks, and there are only five, seem to lyrically depend on a key line repeated over and over. On ‘Guest List’ the EP title “Ain’t Gone Tonight” seems to be the lyric of choice and penultimate track, ‘Radio,’ consists almost entirely of the line “I heard the radio, crackling”. You don’t expect every band to have a great lyricist in their ranks but constantly repeating a line can be distracting and become the only thing you hear, taking away from the music itself. Interestingly, if you go to the band’s Bandcamp page they offer bonus instrumental versions of three of the five tracks on the EP and you can’t help but wonder if this is a band who would prefer to be concentrating on instrumentals. This is something they probably need to make a decision on because, at the moment, they’re a good bunch of musicians with some great melodies but distinctly weak songs – and that’s a shame because the quality of the vocals and the harmonies are very good. If they could find a decent lyricist they might make some real impact.

By the end of this EP there’s a feeling that you really don’t know who this band are. There are lots of good ideas contained in the tracks and you can’t fault the musicianship or the production values but there’s a lack of solid identity that leaves the band seeming a bit amorphous. On the evidence of this recording Hi Lo Ha really need to work out who they are as a band and start turning a good sound into songs that an audience can connect with. Three EPs in five years suggests that sense of solid identity continues to elude them.

Good musicians in search of a good song