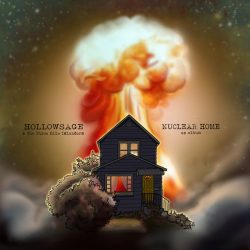 This was first sent in to AUK towers in March this year, but something happened and everything went mad and there’s little point in explaining what that thing was, as besides it causing misery to thousands, it’s boring. If you need to know what happened, you’re either an alien or waking from a coma, both of which preclude you from reading this. You probably have more pressing things to do, anyway.

So, Hollowsage & the Three Mile Islanders (henceforth known as HATTMI) is the project of Sagen Pearse, a funeral director from Ontario, Canada who, with a voice of the same gene pool as Chris Martin, David Gray and Marcus Mumford, has created a melancholically romantic and thought-provoking album that those guys would surely have been proud to make themselves. That’s not to damn with faint praise, as those acts, when listened to with ears unmolested by musical snobbery and the ludicrously uncool idea of ‘cool’, have done pretty well for themselves.

Instantly likeable, this is a collection of stately, sombre, cerebral, heartfelt and emotional songs that, in the hands of the right people, would surely land HATTMI a much, much larger following, which makes it so difficult to believe this is his/their first record given the confidence, assurance and quality contained herein. Arriving fully formed, tracks like ‘Haunted’ and ‘A Letter’ are so beautifully heart wrenching, they’re surely just waiting for a larger audience, as in some ways, this is a kind of throwback to the not too distant past when earnest and reflective songwriting was more prevalent. Reality TV “talent” shows and adverts for evil produce sucked the pleasure out of feelings in popular music, and made those who do feel shamed for doing so, which makes this even more of a truly beautiful and immensely affecting pop/rock/folk record.

It’s not often Americana UK gets sent albums that could be hits, or contain tracks that themselves could be, but this record ticks a number of boxes. ‘Monsters’ rocks like Gregory Alan Isakov sometimes does and ‘Battle We Didn’t Choose’ is another autumnal thing of beauty. If there’s any justice in the world…

Many times in recent years, I’ve heard acts I liked on soundtracks, trailers and adverts. Like the aforementioned Gregory Alan Isakov, Iron & Wine and Nick Drake to name a few, and while this is not music for adverts, soundtracks or trailers, it’s universal enough, it’s honest and authentic and good enough, to appeal to millions; not the esoteric, niche chinstrokers who, quite frankly, are the worst people alive, so it’s good to be reminded that I’m not one of those people, and for that, I thank you Hollowsage & the Three Mile Islanders. Sorry, I meant HATTMI. Thanks HATTMI.

A stately and beautiful undertaking from Canadian undertaker