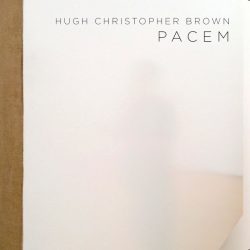 There’s a lot about this record that reminds me of Van Morrison, the deep spirituality and the fluid jazz notes being the foremost. Brown has a range of talents and founded a program to introduce music to prisons. He’s a fearless artist. The record opens with ‘Prayer of St Ignatius’, with vocals from Sherry Zbrovsky, with minimal backing just some comforting flecks of jazz – it’s a start that flummoxed me. The record then moves on to more familiar territory, albeit again, pared back spiritual, confessional, full of atmosphere sketched from acoustic guitar and piano, a rumbling undercurrent, intimate and in a small way strident, Brown draws you in.

Then with ‘Keeper of the Flame’ he opens up: this time it goes widescreen a full band with pedal steel like a lonesome wind, the song trades on Country sounds and the lyrical currency is also close to Nashville though there’s a very un-Nashville depth that Brown manages to give the song through raw honesty. The songs are somehow like historical photographs of doughty Crofters, the transcendence that we sometimes feel, ‘Moved By Hands To Shelter’ with the gravelly voice of David Corley and the naturalistic imagery serve to deepen this impression. Probing into the darkness outside the safe circle of firelight is the primal drive behind ‘The Great Unknowing.’

‘Margaret’ is the closest we get to Van Morrison, and it’s not sounding like it’s more coming from the same place. The Wave with vocals from Kate Fenner, plays around with form – it’s a long way from easy listening. Again the backing, piano chords with splashes of percussion is more influenced by jazz than by country music – it doesn’t follow standard patterns, but sounds brave. I started by mentally dismissing this record as the strange religious ramblings of an overblown ego and the record proved me wrong. It’s different – it doesn’t conform to what we expect and in the end won me over.

Canadian goes into the mystic