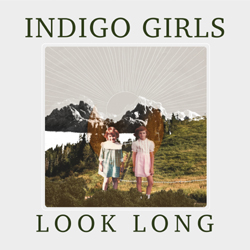 There are few beacons of hope beaming from the USA these days but a new Indigo Girls album is surely one of them. Proudly gay and supporters of too many causes to list here, they have garnered awards galore over their career and ‘Look Long’, their first release in five years will probably gather more in the months to come given that it is on a par with their best work.

Revisiting Peter Gabriel’s Real World studio, the setting for what many consider to be their best album, ‘Come On Now Social’, and with most of the cast from that disc back on board (including producer John Reynolds), Indigo Girls have in ‘Look Long’, a thoughtful, mature and invigorating album. Emily Saliers is quoted in the PR blurb, “We’re still a bar band at heart,” and the opening swampy ‘Shit Kickin’’ might well go down well in a hot and sweaty club but she sells herself short as she and Amy Ray delve into politics, sexual identity and nostalgia over various tender country swoons and some harder edged rock’n’roll.

The title song towers somewhat as its gentle waves of sound accompany lyrics such as “I’m no AWOL patriot because I’ve dodged your party lines” and the yearning ‘Country Radio’ concerns a young gay person in a suburb who can only retreat into personal comfort when locked down in their room. There’s some gorgeous harmonies (with Lucy Wainwright Roche joining in) on ‘Feel This Way Again’, one of three songs which address the hope and dreams of adolescence. ‘When We Were Writers’ captures that feeling of invincibility and sheer joy experienced by teens congregating at concerts while ‘Sorrow And Joy’ flows wonderfully with an arrangement which recalls the best of Jackson Browne as they paint an excellent sepia tinged portrait of childhood with a dark centre.

Elsewhere, there’s the bustling jangle of ‘Muster’ which addresses the fascination with guns in the US and then there’s the angry bluster of ‘Change My Heart’ which attacks the corridors of power, coming across as if Grace Slick and Paul Kantner were reunited. Add to that the new wave like ‘Favorite Flavor’, a delightful ditty which just sounds quite joyful, and you have an album which just begs to be listened to.

Mature, reflective, personal and political - The Indigo Girls are back