Author Emma John talks to Americana UK’s Rick Bayles about her experiences in the Appalachian Mountains and gives readers an opportunity to win a copy of her acclaimed book, ‘Wayfaring Stranger’. The book is about her experiences as she tried to turn herself from a classically trained violinist into a champion bluegrass fiddler. It’s a book that’s made quite an impact on a few of AUK’s writers after it was reviewed on the site,  and we thought we’d like to learn a little more about what makes Ms. John tick and why an award-winning journalist would throw herself headfirst into the world of bluegrass.

Not only has Emma happily given AUK a bit of her time but her publishers, Weidenfeld & Nicolson, have also given us a copy of her book, to be awarded to the selected correct answer to her competition question; all details are at the end of the interview. Read on…

You’re a successful journalist, what made you decide to start writing books?
Actually, it was my first trip to North Carolina that started it. My mentor Stephen Fay, who was my first ever editor and a prestigious journalist, had been telling me it was ‘about time’ I wrote a book, which is a rite of passage for many in our profession. But I had absolutely no inclination because there was generally nothing I was interested enough in to write about. I went to North Carolina on a four-week break from work, having taken my fiddle intending to learn some bluegrass. Within the first week, I was so consumed and fascinated by the music, its history, and its culture, that I just knew I had to write a book.

Your first book, ‘Following On: A Memoir of Teenage Obsession and Terrible Cricket’, is about your fascination with England’s Cricket Team of the 1990s. Why did you choose that as the subject of your first book?
Well, as a follow-on from the first question, I had come back from North Carolina and started writing some chapters of a book about bluegrass, and I was loving expressing myself in that long-form narrative. But no agent or publisher would touch it! Music and travel are two of the worst-selling genres in publishing and I just could not get any interest in it. A friend of mine, the children’s author Rob Biddulph, saw I was getting frustrated and told me to put it aside and try something else. I said ‘well what else would I write about?’ And he said ‘cricket! You love cricket!’ I went to bed that night and the entire concept of ‘Following On’ presented itself to me without me having to think about it. It was like magic.

How do you get from a fascination with Cricket to deciding to take up bluegrass fiddle playing? What is it that attracted you to bluegrass music?
So, the one thing that made me listen to bluegrass was how tricky it was. I am not someone who grew up listening to a lot of popular music, and country music of any kind was unknown to me. But around 2010 a couple of my friends started playing banjo and guitar together, inspired by ‘Mumford and Sons’ popularity. They knew I could play the violin and asked me to lay some fiddle lines over what they were doing. I listened to the country songs they were playing and gave it a go. It was pretty enjoyable, and my banjo playing friend started talking about ‘bluegrass’, which I assumed (wrongly) was what we were playing. Hence the North Carolina trip. It was only when I got there and saw my first bluegrass jam in action, how fast it was, how intense, how exhibitionist, that I realised I was way out of my depth, and honestly, I think that’s what got me hooked.

You trained as a classical musician,  how difficult was it to adapt to playing bluegrass?
So difficult. Every piece of my classical background, the fact that I was trained to sightread, not improvise, the perfectionism inherent in that style of playing, the lack of ‘groove’, made the transition incredibly hard. It made me cry with frustration more than once.

By your own admission you were very much a London girl when you decided to delve into the culture of the Appalachian Mountains; what were the most difficult aspects of change that you had to deal with? How much of a fish out of water were you?
I feel like my Appalachian friends would answer this better than me! They’d probably say that I was pretty game and brave about throwing myself into everything, from the jamming to the socialising to the competitive nature of the music. But honestly, my biggest problem was just slowing down to the pace of life and learning to accept everyone at face value. My London inclination is to walk fast, keep my eyes down, not speak to strangers in the street… whereas Southerners just love to interact with strangers, any time anywhere. I was suspicious and on my guard for a long while before I realised that everyone just wanted to help me.

Is it in your nature to put yourself into difficult situations like this; do you enjoy challenging yourself on a cultural level?
Yes, but funnily enough I didn’t know this about myself until that first trip to North Carolina. It was the first time I’d travelled solo, and it was revelatory, I met and befriended so many people,  I got to know the place so much faster. As a direct result, I started travel writing and now that’s a big part of my job, alongside the sport and the music. And it has opened up the world to me!

What particularly struck me about the characters you talked about in your book was how welcoming and helpful they all seemed to be. Did this surprise you? Were you expecting to be welcomed in this way?
Definitely not. My only cultural touchstones from the American South were Deliverance and Texas Chainsaw Massacre, so I was expecting a lot of bars to fall quiet when I walked into them, and a lot of mumbling in accents I couldn’t understand. Actually, even after a couple of years some of the accents were still incomprehensible to me.

What are the unique things you’ve taken away from your time spent in the Appalachian Mountains communities?
The most important thing is nuance and understanding of the American cultural divide. It is powerfully strong, and dangerous, but it can also melt away on a human level. Playing bluegrass with Trump supporters doesn’t mean you forgive their politics but it does mean you stop seeing them as the enemy. Also, there are plenty of Southerners with more liberal outlooks than me! Many of those who champion Appalachian culture the most are incredibly left-leaning, it’s mining country and has a fierce spirit of solidarity.

Bluegrass festivals are at the very heart of bluegrass, something that comes across very strongly in your book. What sort of impact do you think the pandemic will have on these festivals? Obviously, a lot of them won’t be able to happen this year. What do you see the impacts being on the bluegrass community as a whole?
I’ve spoken to many musicians since the start of the outbreak and it’s just devastating for them. Many of them only ever got by hand to mouth in the gigging economy, these are people who might record CDs, but never expect to sell them, and certainly will never make money from streaming (not that any artist really does). Bluegrass was already a niche subgenre with a long history of sending musicians to the poorhouse, so the pandemic will be brutal for them. Social jamming is the heart of the community too, so there are so many musicians who have been feeling isolated and like their greatest joy in life has been taken away. On the upside, they’ve spent a lot of time writing new material, and bluegrass can suffer from being reliant on the standards. 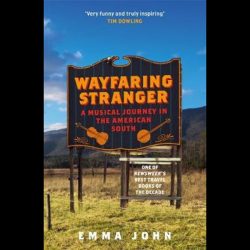 We asked Emma to set a question to win a copy of ‘Wayfaring Stranger’. Her question is –

“Who is known as the Father of bluegrass music?”

If you think you know the answer, drop us an email to – giveaways@americana-uk.com with ‘Wayfaring Stranger’ in the subject line. Remember to include your full name and postal address (so we know where to send the book if you win) with your answer.

The competition will close on the 31st August and the winner will be the first correct answer pulled from the office’s Stetson hat on the 1st September. As always, no correspondence will be entered into and the editor’s decision is final. Good luck.