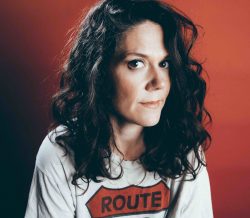 On ‘Trinity Lane’ her third and most visceral album to date, East Nashville’s Lilly Hiatt pulls no punches. Written mostly from a wooden chair looking out at the trees that surround her house on Trinity Lane, the album embodies both a kick-ass rock ‘n’ roll spirit – which Hiatt has in bucketloads – with a deeper, personal reflection on her life, broken relationships and sobriety.

Drawing on her love of 90’s guitar bands – The Breeders, Dinosaur Jr, The Pixies – sonically ‘Trinity Lane’ swells to bursting point with killer tones and vibe. Yet in many ways,  it’s a challenging record and one that, through all the obvious pain and life changes, nonetheless feels positive and something of a statement of intent. I caught up with Hiatt ahead of her upcoming UK tour to discuss it further.

Hey, Lilly, lovely to speak to you, How are you doing?
I’m doing good.

Sounds like you are on the road as we speak! Where are you heading?
Were driving from South Dakota to Montana.

Reading about how you have put the record together, and the reasons for putting it together, where you were mentally and emotionally, I think it’s not only a very intimate sounding record, in a strange way it’s a very confident sounding record? It sounds like you have become very comfortable in your own skin?
Thank you, that’s nice to hear. The writing of the songs was in that manner and once we were in the studio it was a very self-assured place while creating it. So we knew what we were doing and I knew what I wanted.   When I was writing I understood where I was at pretty clearly.

Given a lot of these songs were brought together and written down as snippets, old diary entries etc, when you went to the studio did you know exactly what you wanted to come out with or did the record evolve in the studio too?
Well, I had a pretty clear idea of the direction as we had already sunk our teeth into the overall sound but definitely, once we got to the studio it was refined and polished and sharpened up.

Do you enjoy being in the studio or do you prefer sitting in your house looking at tress and writing songs? Or both, maybe?
Both of those things are really equally fulfilling. I probably liked the writing part the most, but once you see it start to come to life with other people, it’s a very exciting time.

I guess it’s the ‘triangle’ all artists strive for – the writing of the songs, the recording of the songs and then the performance of the songs live. I think you have really managed to create a strong triangle, Lilly. The songs, the sound, I’ve seen you live and you are great. It really crosses genre this record, I think. I notice you have loads of guitar bands from the nineties as influences and from someone entrenched in that Nashville scene it’s a very bold record to make.
Well, thank you. I think it is too. I’ve never felt akin to that whole Nashville sound, whatever that means, and that’s not to disrespect it as its very part of my roots. I guess that kind of encompasses a lot of different things now but, you know, we were certainly not aiming to be polite. ha-ha.

I’ve seen you play a couple of times in Nashville and politeness was never top of the agenda! You put on a rock ‘n’ roll show, basically, I consider you as much a rock’n’roller as an Americana act and I think the record really shines because of that.  Michael Trent (Shovels & Rope) has done a really fine job with the record. What took you down there?
I was recommended him by my record label and I already kind of knew of him. I was intrigued by the idea and we just started talking on the phone a little bit and I got a really good vibe. I know that Michael isn’t really a country music producer and I didn’t really want to work with that, you know.

So how did that work? You speak to him on the phone a few times, sent him a few demos, and then just turn up on his doorstep with the band. Is that how it works?
Yeah, pretty much. We had a couple of really good chats and met up when he came to Nashville, but, you know, it’s a more a case of lets just get out there and make the record we want to make.

I guess a lot will depend on the vibe, how comfortable you feel in the studio, as to influence what will really come out as a record.
Totally, and that’s one of the really exciting reasons for taking it out of town, and we were essentially in the country in John’s Island, South Carolina and definitely some of that vibe got captured on the record. It was a really special thing.

So, how was it growing up with your dad? Daunting? Inspiring? Was he the cool dad in the playground, you know, how did that work out?
It was definitely inspiring. Yeah, he was the cool dad. He’s a good dad. I couldn’t be happier with the dad I’ve got.   It was cool, a lot of music around. A lot of soul, I guess.

When you talk of a soul hanging around, I think that plays a real part in your music. You say in the press release that the songwriting process ‘saved your soul’ I guess that spirit of rock’n’roll comes from that upbringing you had. How do you see that? A lot of people sit for ages on lyrics, guitar sounds and all the technical stuff, for me it feels like the overbearing thing for you is that soul thing?
I think that it’s the most powerful thing, the most powerful high. I think about that Steppenwolf track a lot, ‘The Pusher,’ the pills and the drugs being nothing your spirit couldn’t kill and when I think of music being such a strong part of that. It’s the most powerful thing, that and love. It’s definitely something I have clung to for a long time.

I think that’s something you can’t fake. It’s either there or its not. I think its shines through like a beacon on this record.
Good! Well, I feel like you totally get it!

The David Bowie track I find really interesting. You talk about how that came about as a stream of consciousness? Is that something new?
That is something that I do a lot when I write and sometimes it works and sometimes it doesn’t. But a lot of times I just think stuff and see what happens, sometimes you get a whole song and sometimes the meat of the song is there.   Ha, it sounds ridiculous.

No, it’s kind of improv, you are going all jazz on me, Lilly.
Ha, exactly, and I’m a good freestyle rapper too.   That’s a secret by the way!

In terms of being a musician, especially in the Americana world, there seems to be this consensus that you are all part of one big family. Working in that world I get it, but also see that the music industry is the overbearing factor on everything. For you as an artist, do you see yourself as part of that family when it comes to songwriting and creativity, or, as many artists say, a lone wolf in that context?
I think both. I definitely have a lot of creative friends and musicians I am inspired by. But I’m also a lone wolf in that I do a lot of the creating part initially on my own.   Everyone needs to pull back a little at times, to make their art then join together and flesh it out, I guess.

So, finally, what are the plans this year?
Just to keep on trucking! We will all over the place. And to write a little too, although its hard to do that on the road.

‘Trinty Lane’ is out now on New West