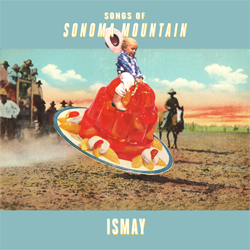 Ismay – aka singer-songwriter Avery Hellman – is named after a small US town in the Northern Great Plains of Montana, which, at the last count, had a population of only 19. But, judging by her debut album, ‘Songs of Sonoma Mountain’, you get the feeling that the place she takes her moniker from might just be a tad too busy for her liking, as this ‘back-to-nature’ concept record was inspired by the five years she spent living and working on her remote family ranch in rural California and it was also recorded there, on Sonoma Mountain, in a 100-year old sheep barn.

These delicate folk songs, which were produced by Robert Cheek (Chelsea Wolfe, Band of Horses), are mostly based on stories about Sonoma Mountain and the animals that live on it. You can actually some hear some of the creatures on the opening ‘A Song In Praise of Sonoma Mountain’, as Ismay has included field recordings of birds, frogs and even the wind from the mountain itself. Listen on some decent headphones to get the full effect.

Her child-like voice is gorgeous and haunting, with a hint of Suzanne Vega, and the songs have stripped-down arrangements that are largely built on fingerpicked acoustic guitar, with minimal additional instrumentation – pedal steel, light percussion, strings, organ and spidery electric guitar.

The mystical and dream-like ‘The Stones’ – written about a special rock that, when seen in a certain light, reveals what looks like a galaxy of stars – is bewitching, with a pretty, spiralling melody, while the atmospheric ‘The 100 Mile View From Virginia City’ has a country feel – it was inspired by an encounter with a bunch of cowboys in a bar and features sounds captured in the Nevada town that’s mentioned in its title.

Unfortunately there’s simply not enough variety to hold your attention for the whole of this eight-track album. Listening to it is like sitting outside in the garden on a hot day, with only birdsong as accompaniment – it’s nice to begin with, but you’ll soon nod off.

Apparently, Ismay’s aim was to “immerse the listener in the world of Sonoma Mountain and bring about the sense that we aren’t as separate from nature as we may think.”

This might have started off as an interesting idea, but, sadly, she hasn’t excelled in her chosen field – or on her mountain.