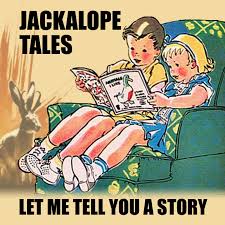 ‘Let Me Tell You a Story’ is the second full-length album from the Sheffield based folk trio Jackalope Tales. It is comprised of three previously released EPs plus a couple of bonus tracks, the band mainly performing songs written by their American songwriter Linda Lee Welch. The album opens with a group composition A Jackalope Tale. What’s a jackalope you ask?  Well… a jackalope is a mythical animal of North American folklore (a fearsome critter) described as a jackrabbit with antelope horns. Thanks Wikipedia. Still no wiser; the track appears to be an attempt at an adult nursery rhyme listing as it does things related or pertaining to this creature. It swings along but the vocals unfortunately are not good or idiosyncratic enough to bring any charm in the lyrical nonsense to the fore, and consequently the track doesn’t escape the boundaries of some naive lyricism and rudimentary bluegrass.

As the album continues Welch’s vocals often conspire to undermine some interesting song writing. Her individual style is best highlighted by the track At Your Table where its weaknesses contrive to add depth to the song but otherwise there is not enough character to excuse the bum notes that appear throughout the album. It’s a difficult call as vocals can be very marmite and this may be the case here. However where the lead vocals are taken by one of the other players, the tracks sound fresher and more accessible – Appalachian Blue for example.

In the end the album does not escape its self-imposed confines which is a shame, as the closing instrumental is delightful and suggests other templates are available.