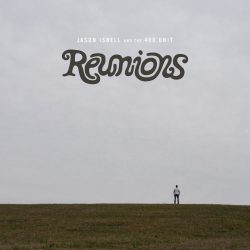 Jason Isbell is the kind of artist who can always be relied on to draw from experience and speak the truth exactly as he sees it, so it’s good to see he’s sticking to what makes him stand out from his contemporaries on ‘Reunions’. But there is a different kind of introspection too, one that meditates on his current relationships – be it as a husband, father, or friend – and looks back fondly on childhood memories.

The opening track, and the first released from the album, ‘What’ve I Done to Help’, has the timely theme of Isbell questioning himself for not being more proactive and less self-serving in the world (“The world’s on fire and we just climb higher ’til we’re no longer bothered by the smoke and sound / Good people suffer and the heart gets tougher / Nothing given, nothing found”). ‘Dreamsicle’, inhabiting a much calmer space, is a beautiful haze of childhood memories: from first love to heartbreak, the separation of parents and having to leave town, to the titular memory of ice cream on long summer nights. As the music drifts along, you really do feel transported back to a time when the smallest things seemed the most important and the bigger issues could be solved another time in the vast future.

‘Only Children’ is the tale of a fellow writer known to Isbell in his younger days. “Cold coffee on the fire escape / We bet it all on a demo tape / And we still had something left to steal / Remember when we took too much?” he reminisces of a friend who, unlike Isbell, we later learn didn’t make it out alive to battle his demons. ‘Overseas’ has a 70s rock feel musically, and lyrically it takes aim at an unjust system that is separating families and putting children in cages. Isbell puts in an especially strong vocal performance here, the cracks in his voice at certain points giving even more weight to already heavily emotive lyrics. “Does your heart rest easy where you are? / And do they treat you like a star? / And do they call you refugee? / From overseas,” he passionately ends the song.

‘Running With Our Eyes Closed’ continues the musical theme of 70s style twanging guitars, while taking on the complex difficulties of making a relationship work: “We can never go back and be strangers / All our secrets are mixed and distilled / But you taught me to temper my anger / And you’ve learned it’s alright to be still.” On the piano-led ‘River’, Isbell flirts with religion with lyrics that wouldn’t seem out of place in a hymn book (“The river is my saviour / Only one I’ll ever need / Wash my head when I’ve been sinning / Wash my knuckles when they bleed”), and even bolder biblical allusions come later in the song: “I’m in a wolf among these sheep for all my life / The lake of fire it consumes me in my dreams / And last night I woke up screaming at my wife.”

There is no doubt that Isbell is a world-class songwriter, but nowhere is this more clearly heard than on the masterful ‘St. Peter’s Autograph’. There is a beguiling melancholy as Isbell addresses someone close to him who is evidently suffering from mental health problems (“Sometimes it’s nothing but that way you’re wired / And that’s not your fault / We’re all struggling with the world on fire”). A layer gets added to the song when we find that someone close to the person in question has been lost due to suicide (“Now you’ve lost another friend / Couldn’t stay to see the end / He had somewhere else to be / Cut him down and burn the tree”), and he tries to reassure that he’s not threatened by the ghost of their presence (“What do I do to let you know / That I’m not haunted by his ghost / Let him dance around our room / Let him smell of your perfume”) .

‘It Gets Easier’, furnished with some nice strings, is an otherwise unvarnished take on the struggles of addiction: “Last night I dreamed that I’d been drinking / Same dream I have about twice a week / I had one glass of wine / I woke up feeling fine / And that’s how I knew it was a dream”. The final song, ‘Letting You Go’, is a heart-rending love letter to the daughter Isbell shares with his wife (and 400 Unit member) Amanda Shires: “Three in the morning I lay my hand over your heart / Just to know you were safe in your sleep / When you started walking / I’d fight back the urge to stay right there beside you / Keep you on your feet”.

As expected, Dave Cobb’s production lets the force of Isbell’s character shine through; be that his bullheaded strength and refusal to conform, or be it his vulnerability and struggles in his relationships with people, or even substances. On ‘Be Afraid’ – which is less of a song and more of a roaring battle cry against apathy – he declares: “We don’t take requests / We won’t shut up and sing,” and for that, we’re thankful, because the world is a little bit richer for it.