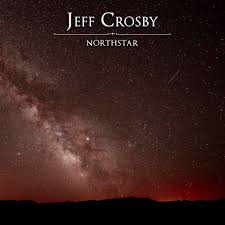 Jeff Crosby had his initial break when two of his 2013 tracks landed spots on the biker series ‘Sons of Anarchy’ and this is the fifth album since then and probably represents a clear distillation of his troubadour street poet persona lyricism and his ambitions as a songwriter as the production is clear and strong with each track sounding like a tight band really enjoying themselves. The breezy opening tracks ‘If I’m Lucky’ and title track ‘North Star’ set a modest template of Pettyesque rhythms and vocal inflections with splashes pedal steel but there is a sense that these could be Americana by numbers. All very nice but… Similarly ‘Hold This Town Together’ despite its Tenchlike piano colour. Mmmm.

But then along comes track four ‘Laramie’ which seems to have a much clearer narrative and musical heft despite its simplicity and Crosby’s voice also appears more nuanced and affecting and also features Ken Coomer on drums. Lyrically a warm recollection couched in a beautiful arrangement. ‘Out of My Hands’ continues the upward trajectory with its dreamy instrumentation and sweet guitar and piano refrain, still referencing its Petty origins but having an originality of its own and as the final verse hoves into view the ear worm is in full effect. A great track. ‘Liability’ is also a cut above. Again another confessional lyric this time with a sparse setting that reflects the bitter mood of regret. Gentle slide guitar and hushed stentorian drums complete the picture. From there the album reverts somewhat back to Americana by numbers with the exception of ‘RedWhiteBlackAndBlue’ which recalls the subtlety of those earlier highlights.

An album of two halves – one excellent the other above average.  Investigate without fear.