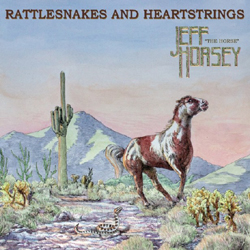 Based in Cornwall, Jeff “The Horse” Horsey is a veteran practitioner of old time blues music, often to be found with his acoustic guitars and harmonica on stages here in the UK and in Europe. This latest venture, a limited edition 10” vinyl EP, finds him branching out somewhat with the focus of the disc a ten-minute long version of a song he originally released on his last album, ‘Songs From The Old West’. ‘Rattlesnakes’ takes up the first side of the disc with side two (yip, I said it was vinyl) occupied by three songs, one of which, ‘Heartstrings’, is the first of a projected song cycle inspired by the characters who populate ‘Rattlesnakes’.

Horsey says that ‘Rattlesnakes’ was inspired by his love of narrative songs with a touch of mystery about them, citing ‘All Along The Watchtower’ and ‘Pancho and Lefty’ as examples. Here he offers up a tale of nefarious deeds as two motorcyclists meet in the desert. There are harbingers of doom – rattlesnakes in the red sand and vultures circling above – and, as you might expect, it doesn’t end well. So far so good but this ten-minute epic is all in the delivery and Horsey pulls out all the stops here. The song kicks off in a dark and brooding manner as he sets the scene before launching into an extended instrumental break with first, his harmonica, and then electric guitar soloing as a Farfisa like organ sound adds an oddly appropriate SF Bay area sixties vibe. The vocals return for the denouement and then there’s another lengthy instrumental passage featuring slide guitar which gradually picks up speed before it gallops into the sunset and the song winds down returning to its brooding manner, sounding for all the world like the end of a Neil Young and Crazy Horse marathon. You can just imagine Whisperin’ Bob Harris chuckling his approval had the song been aired on The Old Grey Whistle Test back in the days. It’s old fashioned for sure but cranked up on a turntable it’s great, almost head banging (or at least swaying) music.

‘Heartstrings’, on side two, follows one of ‘Rattlesnakes’ protagonists who is somewhat puddled in a bar and thinking on his life when a jukebox song “hits him like a hammer in the heart.” This is Horsey in his home territory as it’s a delightfully jaunty acoustic blues romp adorned with some electric picking and excellent harmony vocals. Dylan’s ‘I Want You’ is given an airing as Horsey recalls busking around Australia in his youth with this perennial one of his crowd-pleasers back then. He gives it a fair stab and it allows his harp playing to shine. The disc ends with a cover of Noah Lewis’ ‘Big Railroad Blues’, a song perhaps best known for the version by The Grateful Dead. Horsey delivers some excellent railroad harp huffing and puffing before sloping into some classic blues picking which any fan of Catfish Keith would surely welcome.

To paraphrase football pundits, ‘Rattlesnakes And Heartstrings’ is a record of two halves. However, there’s no doubt that it’s a very handsome artefact. The artwork is by John Hurford who drew for underground papers such as OZ and I.T. back in the sixties and it has the romance of album covers by the likes of The New Riders Of The Purple Sage and especially Quicksilver Messenger Service’s ‘Happy Trails’. There’s also a striking illustration of the song ‘Heartstrings’ in the inner sleeve, painted by Annie-Rose Foster, the only let down is in Horsey’s notes which do not appear to have been proof read. Nevertheless, some great music and a collectable 10” disc add up to a tempting buy.