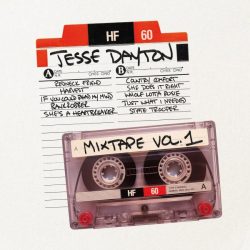 Jesse Dayton’s formative musical experience was apparently seeing The Clash supported by Joe Ely, and the spirit of both those artists is all over Dayton’s new album. Collections of covers can be tricky to manage, needing careful song selection and equally careful reworking to keep the spirit of the original while avoiding note for note recreations.

To Dayton’s credit he manages the balancing act and ends up with an album that sounds like a Jesse Dayton album. The most faithful replicas are Elton John’s ‘Country Comfort‘ which is pretty much a note for note cover. ‘She Does It Right’, is also pretty faithful to the Dr Feelgood original. The Essex band always had a twist of Texas in their sound and this fits right into Dayton’s approach to the song. The Clash’s ‘Bankrobber‘ loses the punk/reggae feel and replaces it with the growl of a Country Rock Stratocaster.

The album opens with Jackson Browne’s ‘Redneck Friend‘ which has been given a light country makeover. Oddly the least successful song on the album is Neil Young’s ‘Harvest‘. Perhaps something from the more electric end of Young’s repertoire might have suited the album better. Elsewhere, his interpretation of the AC/DC classic ‘Whole Lotta Rosie‘ sounds like something by way of ZZ Top and he turns The Cars’ ‘Just What I Needed‘ into a honky-tonk southern two-step.

This is a fun album with good quality control on the songs and arrangements, ideal for summer playing in the car. That he calls it Volume 1 suggests there may be more in the future, which is good news.

A fab, fun collection of covers made with Dayton’s own spin