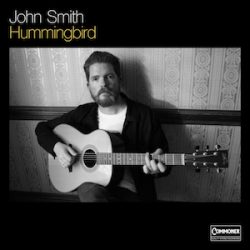 John Smith’s history reads somewhat like the tales of the troubadours he loves. Constantly touring with his guitar strapped to his back for the past fifteen years, he has played with, and for, some of the greatest names on the folk circuit and independently released five albums that have amassed 10 million streams (though I think that last one might anachronistically stretch the comparison a touch). “Hummingbird,”  his 2018 tribute to the music (and musicians) he dearly loves, swells with all of this experience and delight in folk’s history and power.

It’s a beautiful record, a delicate yet care-worn one that holds the weight of the centuries as well as the lightness of the joy that Smith takes in playing each and every one. There are ten tracks on the album including three originals (of which the title track is the most accomplished), one cover (1971’s “The Time has Come” by Anne Briggs), and six traditional folk songs, mainly from the British canon. They are rousing and handled with the gruff care of a father for his new-born, though the darkness and mournful storytelling, along with the hard-worn angle to Smith’s voice, help them to retain their keen edge. And boy, are these sharp.

All the arrangements are pleasingly simple as one might expect from a tribute to the heroes of old. The instrumentation is delicately selected and recorded by a producer who clearly has bags of sympathy for the art-form and love of the project.

The opening number, the single and title track, is a sweet introduction to the following 40 minutes and creates just the right ambience. It doesn’t entirely evoke Hummingbirds musically but it sure is something natural – perhaps the gentle falling of leaves that will no doubt accompany its autumn release. The well-curated collection that follows likewise evokes the history (“Boudicca”)  and geography (“Hares on the Mountain”) of our sceptred isle, from which many of the songs originate, at the very least in spirit. A concept album it is not but there is a theme, and it runs through the whole album like the words in the equally British Blackpool rock – that theme is that Britain (whatever that may mean to us, especially in our current interesting times) is a dark, moody and violent, yet musical, loving and beautiful place with a long history and John Smith’s record evokes all of that, with the spirit that will keep him in the hearts and minds of serious folk fans for time to come. For those less into historical music-making and pastoral story-telling, this may not be as appealing and at worst it could be found to be self-indulgent, but those with an ear for troubadours will want to give this one a whirl.

Epic, historical, beautiful folk music, played with care and love, though a tad indulgent for non-fans of folk