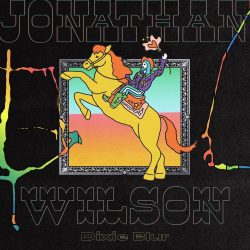 ‘Dixie Blur’ is a really surprising treat. Jonathan Wilson is a modern musical renaissance man and his resume includes band membership, production, songwriting, session work and tour support. The list of musicians he has worked with is incredible and a sample of names would include Elvis Costello, Chris Robinson and Robbie Robertson. He is singlehandedly responsible for the revival of the Laurel Canyon sound, he produced Roy Harper’s ‘Man And Myth’ to critical acclaim and he is also Roger Waters musical director. He has also managed to develop a successful solo career and his last album, ‘Rare Birds’, took nine months to record winning critical plaudits as it paid homage to the producers and production values of the ‘70s and ‘80s including Tony Visconti, Jeff Lynne, Talk Talk and Trevor Horn. All this does not fully prepare you for an album of Americana, Bluegrass, Country, Tex-Mex and the Laurel Canyon sounds of Neil Young’s ‘Harvest’.

The success of ‘Rare Birds’ gave Jonathan Wilson a problem, what to do next? Steve Earle helped provide the answer when he suggested he record his next album in Nashville with a crack studio band to try and get a true  band vibe rather than an overly produced studio sound. Jonathan Wilson is a native of North Carolina and understands that state’s musical heritage of Appalachian mountain music and Piedmont blues and therefore the Nashville suggestion was not so much of a stretch as it may have at first appeared. Furthermore, he was able to persuade that other North Carolina native, Mark O’Connor, to join him in Nashville on fiddle. This was the first Nashville session Mark O’Connor had played on since 1990 and it ensured the city was abuzz with the impending recording.

Jonathan Wilson brought in Wilco member Pat Sansone as co-producer and rounded up guitarist Kenny Vaughan, pedal steel player Russ Pahl, Dennis Crouch bass, Jon Radford drums, keyboardist Drew Erickson and Jim Hoke woodwinds and headed to Cowboy Jack Clement’s old studio for 6 days of live recording. The songs on ‘Dixie Blur’ were written once the concept for the album had been agreed and therefore fit the new approach like a glove. The title reflects the speed and location of the recording.

The album kicks off in fine style with ‘Just For Love’ which is a cover of a Quick Silver Messenger Service track from 1970 which reconnects with Jonathan Wilson’s musical roots and it sets the approach for the album. ’69 Corvette’ follows and is an album highlight as Jonathan Wilson remembers his family and growing up in North Carolina. Doug Sahm’s Tex-Mex is invoked on ‘In Heaven Making Love’ which is a road song inspired by a trip to Spain. ‘Oh Girl’, as the title implies, is a piano and pedal steel paean to lost love that has an upbeat middle passage. The blues and blues imagery get an outing on ‘Riding The Blinds’. Bluegrass comes to the fore on ‘El Camino Real’ with sizzling fiddle from Mark O’Connor. The final track ‘Korean Tea’ is an old Jonathan Wilson song from the late ‘90s adapted to his new style and is an apt closing track.

Jonathan Wilson is a significant musician and artist who has at once looked back at his North Carolina heritage and developed his vision of the rejuvenated Laurel Canyon sound. While the songs are good, the real joy of this album is the musical interplay of primarily acoustic musicians delivering a truly invigorating band sound.