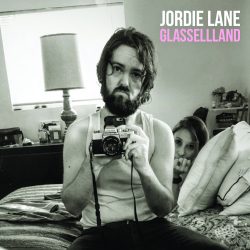 ‘Glassellland’ is the latest offering from Australian indie roots artist Jordie Lane, who recently moved from Melbourne to LA to Nashville. He describes his music as ‘Tropicalia’; combining influences of his Antipodean forebears with those of the Southern folk of his new home Produced by Clare Reynolds (Timbaland, Haley Reinhart, Greyson Chance), ‘Glassellland’ was recorded in Teardown Transitory Studios, in Los Angeles.

Following an intro piece, ‘Symmetry‘, we are treated to ‘Black Diamond’ which is a great story about, ahem.. a guilt-ridden transaction. Lane sings “money’s on the table before we start”. The track itself boasts some lovely harmonica and banjo and has something of a Turin Brakes feel. There are some fine harmonies in ‘Out Of State’, which is a slow building song starting with just an acoustic guitar and some kitsch, lyrical images “stuck in a dream on the Yellow Brick Road“, gradually building to a rapturous crescendo, which even boasts some tuba.

More clever lyrical imagery abounds in the Jeff Buckley-esque ‘A Piece of Land’: “I went off drifting like any driftwood does but I saw things no other would dream of”. An intriguing vocal performance here, with some rich falsetto supported with some lovely double bass and barroom piano. The song itself tells of European travels: “I lost my mind in Amsterdam, I was sure the sign said coffee”. The anthemic ‘America won’t you make my dreams come true’ sees Lane joined by Lollies adding some nice vocals into an already cosmic sound favoured recently by Lord Huron and Kacey Musgraves.

Other highlights include ‘Better Go Outside’, where questions over media overkill are raised and ‘Time Just Flew’. There is even a personal tribute to the life of Lane’s Grandfather in the very clever ‘Frederick Steel McNeil Ferguson’. Personal favourites are the psychedelic ‘In Dreams of War’ (which gets better with every listen) and the final track ‘Rambling Mind’, which is a lovely song about being loved by someone who knows you better than yourself – “she sits at the end of my bed and watches me dream/she got a handle on me and my rambling mind“.

A wonderful way to finish a very enjoyable record.