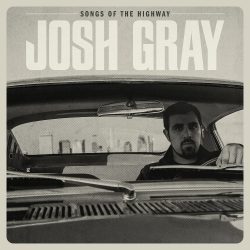 Josh Gray, born in San Francisco, raised in Maryland and resident in Nashville, stares out of the windscreen of his car with a weary look in his eye and a row of skyscrapers in a receding background. No prizes then for getting the message – ‘Songs of the Highway’.  Apparently 30,000 miles in 2015 and this disc is the result of his ruminations during that journey.

The open road, despite Mr Toad’s enthusiasm, has never been a real feature of English life and it becomes less open by the day. We can probably never understand what it means to have an almost boundless horizon and thus the American experience will always be a little alien to us. And that’s why we continue to be fascinated.

Gray’s press release describes the singer as ‘Nashville’s newest outlaw’ but don’t be put off by that. His songs have a far more serious intent, hopefully bypassing the cliché of unfaithful drunken trouble making tax dodging self-regard that often comes with that particular territory. For those of a democratic, dare we say socialist leaning, there are far more serious matters to consider.

The heart of this offering is almost certainly, ‘Darkest before Dawn’, which despite its rather unpromising title starts with definite and arresting intent, ‘Can we care about our neighbours / Instead of asking for their papers’, a concise and eloquent critique of aspects of modern America.  Hands up all those Americans who don’t have immigrant roots somewhere – and that’s you too Donald!

That opening line grabbed me more than any lyric since I heard James McMurtry’s, ‘We Can’t Make it Here Anymore’ which might have closed the book on American xenophobia and jingoism.

Gray berates political leadership, celebrity criminality (as proof that the outlaw tag is a little misplaced), the NRA, white supremacy and the ill treatment of difference in a baritone growl that may make you think of Steve Earle in terms of content and delivery. ‘Darkest Before Dawn’ is a heartfelt and articulate cry for tolerance, delivered with a musical accompaniment of acoustic guitar, strings and whistling that proves wholly effective. If the rest of the lyric does not always match that opening line there is plenty of evidence that this is a serious songwriter and observer of life.

The overall sound is sparse and if the voice might remind you of Earle then it also brought to my mind Sam Baker (though Baker for obvious reasons is pretty unique) and Kris Kristofferson.

The opening and title track laments lost love and the album divides in two thematically – songs of love lost and found and paeans to the poor and dispossessed. ‘Two Hearts on the Run’ offers some light relief with a tongue in cheek, foot tapping tale of mad adventure.

‘Take her by the Hand’, ‘Midnight Rendezvous’, ‘All out War’, ‘Woodland Rose’ and ‘Born in Tennessee’, all consider relationships and love: ‘Love ain’t a battle / It’s an All Out War’. The more socially and politically conscious works include the unaccompanied spoken, ‘Second Chances’, about a chance meeting with someone down on their luck.  The other song of this ilk is, ‘Ghosts’, questioning, ‘Can the Richest Nation afford empathy / For the Ghosts of this American Dream’?  As the song closes Gray recognises that he might just as easily be the ghost hitting those hard times.

The closing track, ‘Ease Your Pain’, recalls Warren Zevon’s, ‘Remember Me’, addressing the moment ‘When one day the spark / In my eyes goes dark’ and hoping that those left behind will think of the love rather than the loss.

As a first full length album this is a fine and recommended offering promising more for the future and offering variety, quality lyrics and some adept musical arrangements.  Apparently 15 years passed between Gray picking up his first guitar and performing live at age 31.  Let’s hope his next collection of songs comes quicker than that!