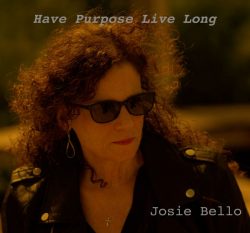 Josie Bello is a multi-instrumentalist singer/songwriter born and raised in New York City and now residing on Long Island. ‘Have Purpose Live Long’, is her second album, the first, ‘Can’t Go Home’, having been released in April 2019.  She fits right into the folk/roots mould and is clearly an active presence in her local area, performing solo, with her Kit House Band and with partner Frank Bello.

Her main assistance on this album is supplied by Mike Nugent on guitar, bass, ukulele and banjo. Drums and percussion duties are shared between Jonathan Mele, Richie Guerrero, Shawn Murray and Ian Petillo.  Tom Fraioli plays the violin and ‘Kelly and Kat’ and Bello herself provide background vocals.

Bello, who has been compared to Mary Chapin Carpenter, Kim Richey and Brandi Carlisle, provides the words, the music, lead vocals, ‘keys’ and accordion.  If you’re looking forward to the accordion then you might be disappointed – unfortunately, it provides only the subtlest and briefest of touches.

Bello covers many familiar subjects in her well-written songs and does have one or two particularly pertinent and insightful lines.  The title track, ‘Have Purpose Live Long’, provides the listener with a potential user manual for life.  Bello’s intentions for her own future are laid clear and there is an element of love song, presumably to her partner.  Her voice in its natural state carries a pleasing little husk though is less impressive when she reaches higher.  ‘Have Purpose…’ has a spoken section and some background vocals that veer towards the heavenly choir, which don’t add a great deal.

‘Magic of the Blues’, is a foot-tapper that explains how singing can lighten the load – enthusing over the sheer pleasure of song and singing (apparently Bello was chirping from an early age and sometimes told just to give it a rest by her mother).

‘Not the America of My Dreams’, is probably at the heart of the album and recounts the all too familiar story of migrants struggling to get there and finding that what they expected is not what they get.  The song contains one of Bello’s cleverest and most telling lines and offers high expectations for her future writing if she can continue to express herself with engaging and individual imagery.

It’s sobering that for many citizens America is equally not the place of their dreams.

‘I Bleed Human’, tackles issues of race and gender with the thought that too often we only look at the outside.  ‘Party With the Saints’, brings some humour to proceedings and Bello tells of her irreproachable life on earth whilst she dreams of, ‘Shredding like Buckethead‘, and taking off all restraints when she gets to heaven.

‘All it Takes is Time’, puzzled a little at first in terms of the writer’s stance, however, when approached the author offered further clarity.

“All it Takes is Time, reflects a story about a woman who was taken advantage of sexually when she was young.  At the time of the incident she was told by her family to try and forget about it, since the man was a powerful figure (“you’ll never bring him down”) and that all it would take is time for the memory to fade”.

As is rightly pointed out, this is the kind of advice that was given in the past (hopefully), providing no justice and years of unresolved anguish for victims.  It was in fact an abuser’s charter.  This song fits right in with the thoughtful and sensitive writing throughout the album,

‘Suffer silently/ Tread lightly /You got too much to lose’

The final two tracks, ‘Twenty Five Years’, and, ‘Hole In My Life’, deal with the ups and downs of relationships and the possibility of filling that hole by waiting optimistically for the departed partner to return. Twenty-five years can elapse and then,

‘It’s a sobering day when your life adds up / To a few of your things in a friend’s pick-up / And a pile of junk in a dumpster truck / In front of the house you fixed up’.

The song seems to be written from the man’s point of view and avoids being overly simplistic, concluding that whilst the old life felt broken, the new can quickly become tarnished,

‘Your new life is feelin’ cold / Even lust gets old’

The lyrics in these last two songs, as with everything in the collection, recount thoughtful points of view and are all the more interesting for not falling into stereotype. No one would be disappointed with this album, well enough sung and played, with particularly thoughtful song-writing.