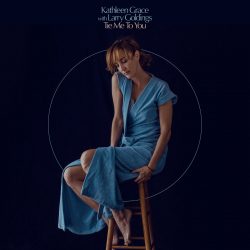 Kathleen Grace went into creating the album ‘Tie Me To You’ with the same feeling that has inspired so many before her: heartbreak. Her devastation was so deep that Grace was barely sleeping and drowning herself in music, when she enlisted the legendary keyboardist Larry Goldings to help her create a new kind of record that moved away from her jazz roots.

The first track – and the album’s namesake – opens with a great swirl of strings that lead into dreamy vocals. The whole thing feels a lot like a stream of consciousness with sparse words that flow freely: “Lie beside me / Hold me still / Diamonds dancing / Orchid fields / Summer wishes / Emerald green leaves unfolding / Listening.” The next track, ‘Where Or When’ contrasts interestingly, the strings gone to make way for electronic loops. The lyrics are fitting with Grace’s situation when recording the album, and the use of such a modern sound on a song that originated as a 1937 show tune also helps to make the interpretation feel fresh and different.

Next is the folk tinged ‘Everywhere’, which along with the opener ‘Tie Me To You’, and the jazzy ‘Embarcadero’, makes up one of only three original compositions on the record. ‘Everywhere’ is a romantic song that drifts on like a long and tranquil summer day. “I’ll dive into your waters / I will not come up for air / I will eat the whole world / Taste your music everywhere,” Grace sings enraptured on the chorus.

‘John The Revelator’ is a traditional song but this version is very much in Grace’s jazz wheelhouse, and she’s right at home with her sultry slinky vocals accompanied by a deep upright bass and a sparse piano arrangement. ‘The Thrill Is Gone’ – a cover of a 1931 show tune that was popularised by Chet Baker – continues in a similar vein. Once again, the lyrics fit well with the place Grace was in when recording (“Love was grand when love was new / Birds were singin’ and skies were blue / Now it don’t appeal to you / The thrill is gone”), and the blues and jazz influences make it feel from another era. Inspired by the version Francoise Hardy recorded, ‘Berceuse’ is sung entirely in French, and it’s equal parts smooth and romantic as it is jazzy and classic.

The final original track ‘Embarcadero’ is another song with a jazz sound that’s familiar to fans of Grace’s. The words, sung in a sultry drawl, talk of a romance now faded that seems so stunning in vivid flashes of memory (“Afternoons of love / We tumbled dancing naked in a wave of roses / Time so ever certain of the everlasting promise that our heart once opened / Never clumsy / Now here we are calling across this mighty ocean / Caught in the pull of currents and less emotion / How could our love fade like the sunset on the water so far away?”).

On the cover of the Cole Porter standard ‘Love For Sale’, Grace opts to leave out the first verse, thus making the subject matter of the song a little more open to interpretation. Otherwise, the track is quite true to the original, but being in her comfort zone does mean that Grace’s vocals sparkle throughout. ‘What’ll I Do’ – originally a show tune but probably best known from Frank Sinatra’s 1962 version – sees Grace giving an effortless, slow, sad and emotion-filled vocal performance, melding well with the jazz stylings on the tune. The Beatles’ ‘I’ll Follow the Sun’ closes the album on an optimistic note; the vocals here have a real spark of happiness, and that’s a pleasure to hear after an album so heavy on heartbreak.

The first few tracks of the album flirt with various styles and that’s fun to hear, but sadly steam seems to be lost somewhere along the way as we fall back into Grace’s comfortable home of jazz and blues. Hearing Grace take steps outside of the world in which she feels most at ease is exciting – and the original songs show promise too – so we can only hope she moves into a more experimental direction in the future and fulfils the potential shown here.