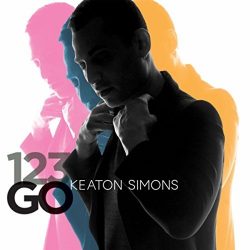 A friend stops by for a beer and asks casually what music you’ve got playing. Keaton Simons? Hmm, the name is kind of familiar and so is the feel but they just can’t place it. ‘123-Go’ is the new EP by the man from LA who, if Americana was a sound that could be nailed down and pinned to a mast then Keaton Simon’s version would be blowing in the wind for all to pay homage. So why is a man with Simon’s talent and connections not sharing platforms and sales with the Ryan Adams’ of this world? Perhaps he’s spent so long playing hip-hop with Snoop Dog, grunge with Chris Cornell and soul with Gnarls Barkley that he’s not had the motivation to zero in on just one style of music – his own.  In his words, “I wanted to develop and really gain experience and knowledge in the business before I launched my own project…”

Simons is described by his own people as a “seasoned veteran” but has only a handful of releases as an artist in his own right in over a decade and that is a genuine shame because, as ‘123-Go’ shows, with a little more focus on his career as an Americana artist he would now be among the elite as opposed to the well-respected. Rant over, and the EP really is a gem which begs another question – why just an EP? Watch this space for the answer to that one. This has been long in the offing for Simons; a pilgrimage to Nashville and a reunion with old comrade and A&R man/songwriter/producer  Marshall Altman in the town he seems to consider his spiritual home, at least in musical terms. The lush, mellow grooves that accompany Simon’s languid vocal style retain undeniable Californian influences – think John Fogerty hits the beach. But Altman’s production is smooth without crossing into sleek and the hint of mountaintop banjos soothes the lowland growl of swampy guitars. The Nashville thing works for Simons.

Lead track ‘Crane City’ is the story of gentrification everywhere and it breaks Keaton’s heart (he tells us so). It’s melancholy in narrative and swinging in beat. ‘Crazy in Love’ is Americana for a spring bank holiday – all huge melody and, well, crazy in love. These six songs have something for everyone. It’s the soundtrack for limitless horizons and sippin’ whisky, big cities and high school romance. Let’s hope this EP is a taste of things to come and there is more to follow soon, and then more soon after that.

Star-studded session man brings a touch of Hollywood to Nashville