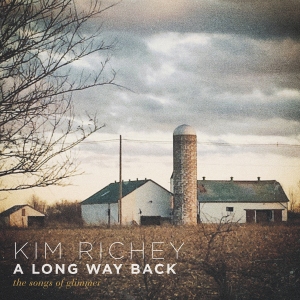 Kim Richey’s ‘A Long Way Back: The Songs of Glimmer’ is a 20th-anniversary edition of her 1999 album ‘Glimmer’. And here’s the dilemma: should this album be reviewed as a comparison to the original? Or should it be reviewed on its own merits, without reference to the mother lode? After all, they are the same songs, recorded by the original artist, albeit, as she says, “reinterpreted”. Well, no matter, it is a fine album and the decision to re-do the songs more than justified.

Richey has a rich pedigree of songwriting, having penned tracks for a host of country stars (Mary Chapin Carpenter, Gretchen Peters, Patty Loveless among others) and even a No 1 for Trisha Yearwood, and her vocals also appear on Jason Isbell’s ‘Southeastern’ album as well as albums by Ryan Adams and Shawn Colvin. Her own songs and albums have enjoyed great success since ‘Glimmer’, but it is still easy to see why she wanted to return to the songs that really set her on her way.

The original album was produced by Hugh Padgham (yes, the chap that produced Phil Collins and The Police) with production that would be expected for the time, but this revisit was recorded in producer Doug Lancio’s basement studio with a more intimate handling. The songs have been given the stripped back treatment in the main, although not all tracks are simple vocal-and-guitar versions. With themes of break up, rejection, letting things go, forever love, starting afresh and failing relationships, this album is real from the heart stuff.

Richey has a delightful voice, with that little raspy scratched edge at the end of line, sought after by so many female singers. This works well with strong lyrics on the breakup songs: ‘Come Around’ wistfully longs for a return to what was….”But there’s really no place else on earth/For me right now/I wish you’d come around”, as well on songs about forgiveness, such as ‘Long Way Back’….”It’s a long way back from where I stand/You’re clean off the map/Knee deep in no man’s land.” One of the standouts is ‘Keep Me’, which has less of a stripped back and more a smart production, well delivered guitar and vocals, pleading “Wherever you go forever, keep me.”

A couple of tracks – ‘Long Way Back’ and ‘Good at Secrets’ – have a charming surprise with the inclusion of a flugelhorn, played exquisitely by Dan Mitchell which really enhances the songs. Richey provides some interesting chord changes throughout the album, notably on ‘Gravity’, and ‘Hello Old Friend’ about a possible rekindling  – “I like the way you sound/Straight out of Lost & Found” – has a dancing vocal melody across a quite lively rhythm guitar. There is even room for a pop-country diversion on ‘The Way It Never Was’, a kind of Taylor Swift song before there was Taylor Swift.

Not everything works; a couple of tracks manage to land just the right side of high school musical territory, but only just. However, the album finishes strongly with ‘Strength in You’, an upbeat radio-friendly piece with guitars and organ, and closes with ‘Didn’t I’ a slow, old-style country post break up song about staying friends….”Didn’t I try to make amends/Be a friend/Didn’t I?”

Brandi Carlile is a big fan and is on record as saying her own vocal style borrowed elements of Richey’s while listening to so much of her earlier stuff, including ‘Glimmer’. Listening to this album it is easy to understand why. This is a lyrically rich and musically strong album, a collection of songs that are interesting and surprising and (mainly) delight.