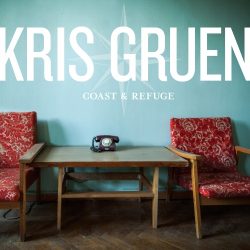 ‘Coast & Refuge’ is the fourth studio album from Vermont native Kris Gruen, following 2013’s critically-acclaimed ‘New Comics From The Wooded World’. It’s been an eventful few years for the singer-songwriter, sharing stages with the likes of Jesse Malin and Alejandro Escovedo, as well as contributing a track to feature film All These Small Moments, which premiered at this year’s Tribeca Film Festival.
It is on an ever-growing wave of hype that Gruen releases his new record. This hype is fuelled by a collaboration with the esteemed Peter Morén, of Peter, Bjorn & John fame – the catchy ‘Every Day & Night Now’ – which features on the record. The track features the breezy, typically Scandinavian pop sensibilities which are a staple of Morén’s previous work, combined with Gruen’s upbeat folk style.
It is the pop element which permeates ‘Coast & Refuge.’ While maintaining what could now be defined as a “classic” Gruen style, the vast majority of the choruses on the record feature “oh-ohs” to the point where it all becomes rather formulaic rather quickly. Even the ballads largely reach the same eventuality. The slow build of ‘What Brings You’ is only two songs in, and the hollering chorus already feels stale.
On the few tracks where Gruen doesn’t rely on his go-to, he treads MOR very finely. ‘Coming Down Around Me’ is a whistle-fuelled damp squib, while ‘Give It All Away’ is instantly forgettable. One of the few occasions where Gruen really shines, however, is on the excellent ‘By The Fire’. His vocal is the strongest it has ever been, backed by some angelic backing vocals, as a pounding kick-drum keeps the track powering along. ‘Lions’ is another highlight in which Gruen delivers an uplifting message that “hope is not some antiquated, orchestrated long-lost notion,” and although the “woah-ohs” are used yet again, the numerous sing-a-longs that Gruen has managed to squeeze into three and a half minutes is nothing less than impressive.
In a musical landscape where a vast array of modern folk acts use a similar hook which has led to more mainstream appeal (see The Avett Brothers, The Oh Hellos et al), Gruen relies on this far too much, and his otherwise perfectly fine melodic songs lack a spark to elevate them into something more interesting.
4/10