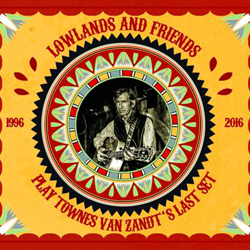 Italian band Lowlands have form in the tribute album area with their homage to Woody Guthrie from a few years back a fine reimagining of the old hobo’s songs. Here they celebrate the late great Townes Van Zandt with a song by song delivery of his last ever setlist, a show at London’s Borderline on 3rd December 1996 just four weeks before his untimely death on January 1st. Edward Abbiati, the Anglo Italian lynchpin of Lowlands was at that show, an experience he describes in the extensive liner notes where he also writes about why he recorded the album and records his gratitude to the stellar friends who joined in the project. It’s an impressive line up with Sid Griffin, Chris Cacavas, Rod Picott, Antonio Gramentieri, The Lucky Strikes, Cheap Wine, Kevin Russell and Stiv Cantarelli just some of the artists involved.

As a blow by blow recreation of a live gig this isn’t a “greatest hits” by any means as Van Zandt delved into various nooks and crannies on the night, the opening song being a Lightning Hopkins number for example. Reflecting this eclectism the songs on the album encompass a variety of styles ranging from stomping blues and dust blown rock to punkish folk and sweet and soulful country (again Abbiati enlightens with his notes on each selection) allowing the album a vibrant dynamic as Van Zandt is reimagined through several lenses. There’s a further twist as each song is introduced by the legendary Barry Marshall-Everitt (back then the Borderline manager) as if one were listening to a radio show. It’s a cool touch and it works well with Marshall-Everitt’s voice reminding this reviewer of good old days spent listening to Alexis Korner on the radio, the vocal similarities uncanny. It ties the package together and lifts it someway above your average tribute album.

Abiatti shares vocal duties with a guest singer on all of the songs while his Lowlands band mates form the backbone on most of the tracks but again the guests are given plenty of space to stamp their authority on the songs. It would be unfair to single out any one (or two) for special mention as each interpretation is unique, the common thread a love of and respect for Townes Van Zandt and his music. Suffice to say that we get versions of Pancho And Lefty, Loretta, Waiting Around To Die and Tecumsah Valley among other favourites along with a take on Elvis’ Ballad Of The Shrimps and two Lightning Hopkins numbers. It’s a superb album, excellently packaged and delivered with love.

A unique and heartfelt tribute to the late Townes Van Zandt from those who were there on his last night.