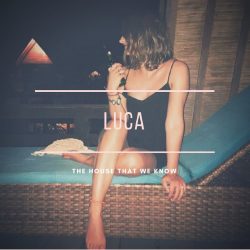 Nice to have a debut recording from a homegrown talent to review at the start of a new year. Lauren Luca, known professionally as Luca, is a young singer/songwriter from the Manchester area and this is a confident and well-produced introduction to her and her songs. This EP consists of three self-penned songs plus, as a bonus, an acoustic version of the title track. This is a nice touch as you get to hear some of the thinking behind the development of the fuller, EP version. The acoustic track also lets you hear more of Luca’s voice, which has a frail, breathless quality that works well with her songs.

The arrangements of the full band recordings are very good but one criticism is that they, just occasionally, start to overwhelm Luca’s voice and that really needs to be front and centre at all times. This artist lists her influences as the likes of Sarah McLaughlin, Alison Krauss, the Dixie Chicks etc and you can certainly hear some of that in her music but she’s probably most reminiscent of a younger Kacey Musgraves, both in her voice and in the style of the songs, which are all experience-based and written with a simple honesty that is refreshing and effective.

The liveliest of the three songs is ‘Dance Tonight’, which starts off with jangling guitars and introduces some nicely played slide guitar, with Luca harmonising with her own voice on the choruses. While this is a good track it’s the one where her voice becomes the most buried and the lyrics hard to hear. We also have ‘Lullaby’, a slow, keyboard-led song and the title track itself ‘The House That We Know’, which is the stand out cut of the EP. This is a strong song about a break-up that really shows off Luca’s voice to best effect with some excellent bittersweet lyrics – “I’ll miss you the most. I won’t choose to go and you can’t follow me like you used to. Yes, I’ll miss you the most, I’ll get in my car and go back home to the house that we know”.

It’s always hard to judge a new artist on the strength of a limited recording. These are three good songs, but there’s not a huge variety in the style and pace of these offerings and you have to wonder if this EP is a bit of a rushed release – she might have been better to wait until she had a wider range of material to put out, though we understand that a full length album is planned and it will be interesting to see how that progresses.

Mention should go to the fine playing of the musicians who worked with Luca on these recordings. The song arrangements are her own but they’ve been sensitively interpreted by session musicians Dan Bridgwood-Hill and Tom Long who have really helped to bring the songs to life and the production from Karl Sveinsson is generally very good indeed.

In all, an assured first recording from someone who offers a lot of potential for the future. We’ll watch with interest.