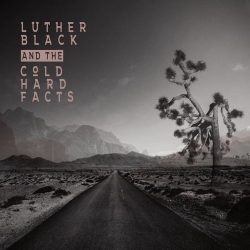 “There’s an old adage that your first album is your best album because you had your whole life to write it. Well that gives me a big advantage releasing my first album at my age”. So says Rick Wagner, which also explains the title of the opening track ‘59’, a tale of his wild blue yonder, in both time and geography. Adopting the persona of Luther Black and the Cold Hard Facts, Wagner is singer, player, writer, producer, publicist. Everything essentially, other than musical friends adding strokes.
The sound is the usual collection of mid-american styles and tropes, delivered with much enthusiasm and lots of enjoyable guitar. Wagner’s experience of his decades in and around the industry mean he knows better than to try any innovation, rather recycling sounds and styles to sum up a lifetime of exposure to its sources. Can this get a bit predictable? At times yes, but the music is very well played and produced, and there is usually a decent 4, 5, 6 or 12 string lick arriving soon to enjoy.

The lyrics are honest rather than poetic, and completing the past/fast, door/more etc couplets before he sings them can be fun. Wagner will surely recognize that he doesn’t possess the sweetest voice. In ‘Trouble’ – a roll call of his six decades of shenanigans – his reach for the notes fits perfectly, but in the slow blues of ‘Proof’ it’s more obvious. ‘Under the Influence of Love’ alludes too readily to Townes Van Zandt, but ‘Backroads’ has lovely Byrdsian jangle. No boundaries are broken on this album,no apple carts upset, but for a senior putting out his debut album, you have to ask if the album doesn’t need to be as a success on its own terms.