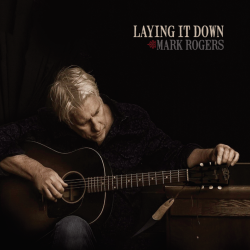 ‘Laying it Down’ is Mark Rogers’ first full-length L.P. following a couple of EPs since reactivating his music career in 2012. Five of the eleven songs featured here are recycled and remixed from those EPs. His website describes a mix of styles: “Jazzy Bossa”, “Americana” and “Indie folk Pop”, and there is certainly a mixture here. Opener ‘Right Here’ could have come off the second Tom Petty album.

‘Blue Sky Falling’ which follows has a guitar part straight out of Jerry Garcia. Then suddenly half way in we get ‘I Know it so Well’ which would be quite at home on Jazz FM, all brushed drums and cocktail piano. After that we dive straight back into the Hammond organ and twangy guitars for ‘No Bigger Fool’, one of the better songs here. The Jazzy Bossa box is ticked again next with ‘The Blues Are Passing By’ where the vocal inflexions shift from Petty to Bublé. The highlight of the remainder of the album is the Paul Simonesque, ‘You Can Lead Me On’.

There are a couple of pop-lite ballads, ‘Waiting’ and ’Imagining’, and that’s that. Rogers’ stated influences are The Byrds and Warren Zevon, but you can hear elements of The Beatles and CSN in the quieter songs and the vocal mannerisms are very Tom Petty-ish with perhaps a flavour of Gene Clark at times. And therein lies the problem with this album, it has the makings of a really good EP in it. With so many of the songs already out there, the new songs – which by and large are the better ones -would perhaps have benefited from being released separately. Taken as individual songs there are at least three or four that would get noticed if released by themselves rather than being suffocated under the undigested influences of the rest.