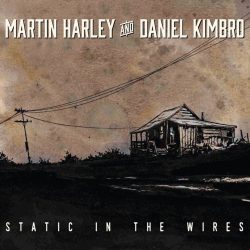 Martin Harley, globally established badass of lap steel guitar, and Daniel Kimbro, upright bass player whose gig, venue, and collaboration credits read like a folk fanboy’s bucket list, are back with a new album. “Static in the Wires” is mostly a bluesy affair, well balanced between electric and acoustic textures, with occasional spaced-out echoes thrown into the mix. Of course, it wouldn’t be a Harley record without some upbeat folky finger picking.

The lyrics are more strictly on-genre, with tales of the road, rambling, and regrets. The record’s last number, Mean Old City – Part 2, delivers a more refreshing admission: Maybe a lot of this pain and yearning is self-inflicted, welcome, even?

It is the slide guitars that truly steal the show, though, and leave listeners wanting more. Harley has been performing on virtuoso levels for years now, with both the tone and the playing honed to perfection. The acoustic shredding of his signature Weissenborn (a hollow neck lap slide) cuts particularly deep. In case that’s not enough, dobro legend Jerry Douglas makes a guest appearance, so no fan of putting steel to strings will be left disappointed.

“Static in the Wires” is a satisfying proposition for both blues and folk crowds and will keep both hyped to catch the nearest live show in March.

If you like your guitars belly-up, you’d be a fool to miss this one.