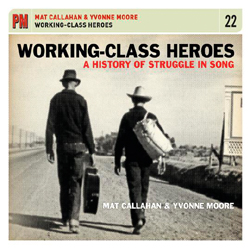 You know times must be tough when an album of pre World War 2 working class American songs sounds topical. ‘Working- Class Heroes’ finds folk singers Mat Callahan and Yvonne Moore revisiting 20 songs mainly culled from ‘Hard Hitting Songs for Hard-Hit People’, a book compiled by Alan Lomax with notes on the songs from Woody Guthrie and Pete Seeger, which was published in the sixties. It’s a reminder that times were certainly tough back then and also that the American working class were much more radical with communism and anarchy popular while strikes were often broken with savage violence by the forces of capitalism.

Moore’s interest in the songs of Sarah Ogan Gunning, an activist and singer from the coal mining regions of Kentucky, was the spark for the album. Gunning sang about the working conditions of the coal miners, their families and the struggles of the unions against thuggish owners. She was recorded in the 1930’s and rediscovered in the folk boom of the early 1960’s and it was her inclusion in Lomax’s book which led Moore to investigate it. Accordingly, six of Gunning’s songs are featured here while her sister and brother, Aunt Molly Jackson and Jim Garland, also feature. Indeed, aside from a single Woody Guthrie song, the authors are unfamiliar with one song credited to “an unknown proletarian.”

Having said that, several of the songs are familiar. Joan Baez sang ‘Joe Hill’ at Woodstock and there are renditions of ‘Going Down The Road Feelin’ Bad’ and Gunning’s ‘I Am A Girl Of Constant Sorrow’. Gunning was a dab hand at taking familiar tunes and adding her own words to make her case as when she uses ‘Sailor On The Deep Blue Sea’ as the scaffold for ‘I Hate The Capitalist System’. It remains a powerful song and one can only imagine the effect it had back then and Gunning’s words still burn on ‘Dreadful Memories’ while her brother, Jim Garland’s ‘The Murder Of Harry Simms’, lays bare the mortal perils faced by union organisers. Indeed, two songs here were written by Ella May Wiggins, a union organiser who was shot dead by management thugs in 1929, the perpetrators charged but found not guilty despite numerous witnesses.

Callahan and Moore are earnest in their reworkings here, the songs featuring only their voices and guitar with occasional harmonica. There’s no attempt to sugar the pill so it’s unlikely that they’re going to storm the charts but it has to be said also that for some of the time the duo fail to inject much passion into their renditions. There’s little fire or fury here and they seem most comfortable on the more up tempo numbers such as Guthrie’s ‘Mama Don’t ‘Low No Bush-Wahs Hangin’ Around’ and the humorous ‘Skinnamalinkadoolium’. ‘The Mill Mother’s Song’ is quite affecting, the Gospel themed  ‘Come On Friends And Let’s go Down’ works well and ‘There Is Mean Things Happening In This Land’ does have a glimmer of anger in their bluesy rendition. Overall, it’s a worthy release and a reminder that in these days of food banks and the gig economy the exploitation of, and disregard for, the working classes continues apace.