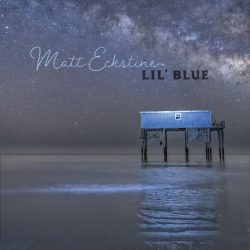 Almost 20 years ago, songwriter and performer Matt Eckstine upped sticks from his native Ohio and settled in the Lowcountry of coastal South Carolina and Georgia. After some time fronting Savannah local band The Accomplices, in 2017 Eckstine released his first solo album, and ‘Lil’ Blue’, his second, recorded at his home studio in Savannah, paints rich images of the world he now calls home, with americana tunes telling tales of fishing, beach side cabins and his adopted home city.

Eckstine originally set out to release an EP just as quarantine kicked in and, with a great deal more time suddenly on his hands, revisited some older unfinished work and added a few new songs to complete the album. The result is a likeable combination of blues, country and even Hawaiian-tinged tunes that reflect the life and sub-culture of the area. ‘Part of the Ride’ opens the album, a country-standard offering, with honky tonk guitar and harmonica and a raspy vocal, which is a feature of Eckstine’s style. This track also introduces the loose overall theme of the album, the need to go with the flow, just enjoy it all, it’s all just part of the ride. ‘Mahi-Mahi and Rice’ has a Jack Johnson, laid back vibe, a fishing tale complete with boat bells, waves and a gentle wind as the backing track, and ‘Honeydew’ is the first of the blues numbers, complete with that distinctive vocal, sax and organ.

There are poppier/rockier songs, including ‘This Heaven’, a radio friendly suggestion that heaven is the joyous experiences we have in our lives, not some beautiful ‘other’ place we end up when we pass, and ‘Old Guitar’, a Steve Earle style metaphor for his home city of Savannah… there is always something out there on which you can rely. The title track, a blues acoustic song with some decent mandolin, is also the name of a beach cabin – the very one of the album’s front – that was absolutely battered by a hurricane in 2016, but survived. Well, survived long enough only to be declared unsafe due to erosion by the local authorities and subsequently torn down. Feels like a metaphor for other recent events, somehow.

‘Here They Stand’ is an acoustic folk song that originated as an outtake from a recording session with Eckstine’s previous band and takes a stance that life should not be about material things, with a hook of a repetitive refrain of the title. We close with a Hawaiian feel, ‘Uku Mama’, ukulele (clue is in the title), guitars and a simple singalong of few words, a fun way to conclude.

It’s clear that Eckstine has learned a lot from John Prine in terms of his songwriting style, which he is now developing into his own, with perhaps even a touch of Tom Petty, and there is nothing wrong with that. Just one other point – this isn’t the longest album ever recorded, with a running time of under 25 minutes, which makes it almost feel like a long EP, rather than a full album. But the short songs really are fine.

A mix of seriousness and fun from Savannah