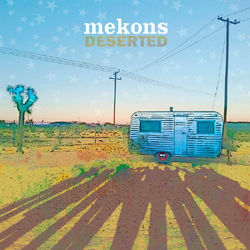 Forty years down the line, the Mekons remain one of the most credible bands to have emerged from Punk who are still drawing breath. One of the first outfits to recognise that authentic roots music could be punk in nature, they drew on insurgent country, folk and world music to forge a reputation as an ever-questing and energetic lot, their album releases still pertinent and welcome. A far cry from many of their early contemporaries.

‘Deserted’ finds them encamped in the Mojave Desert, close to the famous Joshua Tree National Park, recording in bass player Dave Trumfio’s studio. Fittingly, several of the songs refer to deserts, sand and sun, but being the Mekons they don’t offer any sun blasted ballads or sub-Morricone desert rock, instead they cast about coming up with memories of clear Australian nights, gun running in Abyssinia and even an urban myth relating to Iggy Pop. Similarly, in true Mekons’ fashion they thrash around a melange of musical styles including country punk, bass driven funk and gritty folk-rock.

The opening song, ‘Lawrence Of California’, finds the band emerging from a squall of feedback to deliver a screeching fiddle-driven rant of sorts. You can imagine the band dressed in Mad Max outfits here as the feral lyrics refer to a battle for supremacy with a bone-crunching intensity. ‘Mirage’ is another teeth-rattling trip as a solid bass riff underpins crashing angular guitars with Jon Langford in his best agitpop voice howling away. It’s reminiscent of The Pop Group. ‘Into The Sun/The Galaxy Explodes’, while still vibrant, is, in comparison, almost easy listening although it still comes across like a mash-up of The Raincoats and Hawkwind. From exploring space the band go back in time for ‘Harar 1883’ which tells of the adventures of poet Arthur Rimbaud who, after his sensory disarrangement, forsook poetry to run guns in Africa. Here the lyrics refer directly to the desert dread faced by strangers in this strange land and perhaps there’s a mischievous subtext here regarding foreigners interfering in African matters.

As stated earlier, the band do wander through some shifting whispering sands. ‘In The Desert‘ does shimmer somewhat with a heat haze as a rattlesnake like percussion underpins fragile washes of acoustic guitar and violin while ‘How Many Stars’ is a beguiling mix of dreamlike music and bawdy sea shanty. Weirdest of all is the Bowie (and Anthony Newley) inflected ‘Weimar Vending Machine/Priest’ which has Iggy Pop in Berlin mesmerised by a vending machine which delivers him a bag of sand (“10,000 grains…he can hide inside his hand as a God in the act of creation flings out a galaxy of stars”). With references to Brecht and Weill and an overall nihilist viewpoint, it’s a pretty stunning piece of work. They wrap it up with a much gentler song on ‘After The Rain’ which, despite some apocalyptic visions, contains some seeds of hope.

‘Deserted’ might be somewhat confusing at times but at its core it’s a bold adventure and a grand reminder that aging punks can still bite the bullet.

Still able to give it laldy. The Mekons abide.