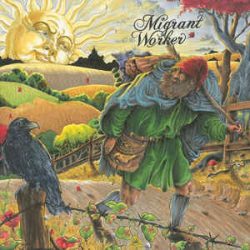 Reviewing a new release, particularly a debut release, by a band you’ve never heard of before, is always going to be something of a lottery. As with any lottery, most of the time you are likely to find hopes turning to disappointment. Occasionally, you may be rewarded with a small win. However, without wishing to flog the metaphor to death, the debut album from Migrant Worker can be considered as striking the jackpot.

Migrant Worker hail from Atlanta, Georgia and are the creation of producer and musician Josh Thane. The band’s own PR states that “their sound is not an easy one to pin down”. Like many of the great bands that have come out of the southern states of America, Migrant Worker represent a melting pot of the sounds and influences that surround them. The terms ‘Americana’ and ‘Roots Rock’ that have been used to describe them are probably too narrow to fully portray the richness and diversity demonstrated on this quite striking debut album.

The opening track ‘Wheels to the Ground’, clicks into a Petty-like classic American rock sound that is perhaps the most prevalent influence amongst the many laid out across the album’s nine excellent songs. ‘Easy Answers’ and ‘Water in the Well’ continue a similar vibe.  Thane’s voice is actually not unlike that of Tom Petty, but with a slice of Tom Verlaine grafted on. The band take their name from a line in JJ Cale’s ‘Thirteen Days’ and the funky blues feel of ‘Old Crow’ is further confirmation of the strong influence that the guitar legend has had on their sound. The soul-jazz feel of ‘Tomorrow’ and the funky horns and blues piano of ‘What’s the Use’ bring in influences from Memphis to New Orleans. A strong lyrical base augmented by intricate, but never overblown, guitar work add to the mix and all come together on the album’s last track ‘The Next Fool’ a country-rock finale that many bands operating in that genre, could only dream of.

With their self-titled debut, Migrant Worker have produced a very accomplished record. It pulls together sounds from the past, polishes them up and adds a fresh vibrancy to them. Each track has it’s own identity and style, but it is the complete work which is the star here. The collection holds together beautifully as an album, that like any great album, gets better with each listen.

Striking debut from Atlanta based collective