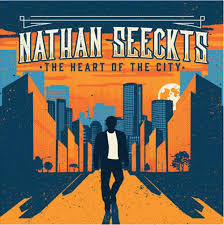 The definition of what constitutes Americana has been a long-debated subject in these circles and, while that conversation is destined to run and run, what cannot be disputed is the global reach of this wonderful musical genre. Nathan Seeckts is doing his bit in this regard in his native Australia by hosting a weekly Americana based programme on community radio that supports and promotes the work of his peers within the Australian alt-country community.

On the back of three sell-out EPs Seeckts has used a successful crowdfunding campaign to release ‘The Heart Of The City’, his first full-length album. With a voice that almost defines the word ‘gravel’ in musical terms his vocals will resonate with anyone familiar with the likes of Israel Nash and Otis Gibbs. Seeckts holds nothing back. He attacks each song full on and the fact that the majority of the album was recorded live in only 2 days is no surprise.

The self-penned songs showcase a fairly wide range of styles; for every loud, rock driven track like the album opener ‘Old Blood’, a reflective lament of a small-town musician who lets tiny glimmers of local recognition go to his head, there is a ‘Moonlight Creek’, where Seeckts uses that great voice to deliver a song that leans much more towards folk. Here, the small-town environment is used as a backdrop again, this time with a haunting lyric and a much simpler arrangement of acoustic guitar and the violin of Kat Chish, to tell the story of a missing girl and the impact it has on the community. It is a lovely song, and an indicator that Seeckts has a range of songwriting styles that very much adds to the appeal of the album.

‘Beast Beneath The Bed’ was singled out for praise within Australian songwriting circles in 2018 and it is easy to see why. An undoubted highlight, it features some great guitar work and serves also as a celebration of just what a great job Seeckts has also done on in his co-production of the album. The track has a great rhythm and feel to it and shares top billing with ‘I’m Your Queen’, another track to feature the great violin work of Chish.

Seeckts is not afraid to tackle difficult issues in his songs, never more so than in ‘Sirens’ a track that cuts through the depressing reality of domestic violence. That Seeckts can address this and wrap a moving story within the confines of a great sounding song only highlights once again the quality of his songwriting. He has delivered an album that is a fitting reward for those grassroots supporters who believed in his talent enough to put their hands in their pockets.

Americana from Australia. There is no travel sickness here.