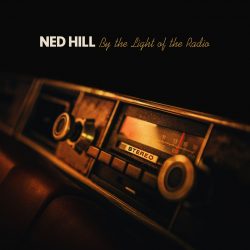 The moment first notes of ‘Lonely Heart of Mine,’ the opener of ‘By The Light of The Radio’, the new album by Nashville ‘old hand’ Ned Hill hit the speakers, one word immediately comes to mind – honesty. You see, Hill has been around the Nashville scene too long not to realise that going beyond what you know and pretending to be something you are not will not cut it.

But, then, that can often produce ‘medium’ or more bluntly said mediocre music. Not if you know what you’re doing, how, and why. And based on this album, Hill knows all the right answers to all these questions.  Being some 20 years on the Nashville scene and having some excellent musicians on board say, Michael Webb who played with John Prine and Sturgill Simpson or Bob Grant who played with Bad Livers, certainly gives the right answers to the first two questions.

Then comes the answer to why, and that is where both musical and lyrical honesty comes in with Ned Hill. Hill certainly sticks to what he knows (and he knows a lot) and to musical ideas he loves, namely the likes of Townes Van Zandt (‘Thunder in December’), John Mellencamp (‘Wake Me Up’), and even Bruce Springsteen in his Americana mode and socially conscious lyrics (‘That Ol’ Black Lung’).

The end result is an ultimately enjoyable album with excellent playing and an honesty concept that works.

A true, down to earth Americana that exudes honesty