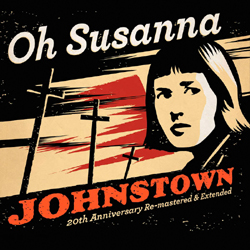 20 years after its original release, Suzie Ungerleider’s debut album as Oh Susanna gets a reboot. Following on from a vinyl only reissue earlier this year for Record Store Day, it’s now available on CD including five acoustic songs which were offered as a download for purchasers of the limited edition vinyl. On its release ‘Johnstown’ was critically acclaimed and it was championed here in the UK by Bob Harris. Back then it was tagged as folk-noir and there’s no reason to quibble with that as there are dark undertones on many of the numbers but what is remarkable is how contemporary the album sounds.

If it were released today we’d be comparing ‘Johnstown’ to the works of Amber Cross or the recent debut by Ian Noe as Ungerleider unveils a sometimes harrowing set of tales hewn from agony and distress. Her voice rings out with some force, bluesy at times but always full throated, while the arrangements range from swampy rock to muscular solo acoustic pieces. The opening title song wades into muddy waters as Ungerleider conjures a nightmare picture of biblical floods and murder over a churning mess of guitars. On ‘Walking’ she drops the band but the song is just as powerful as she relates a tale of a young girl who dresses as a male in order to overcome the barriers in place against her gender. ‘Parallel Rail’ bristles with  barbed slide guitar and Dobro which create an atmosphere chilling enough to raise the hairs on the back of your neck while ‘Pueblo’ reaches back into history coming across like Neil Young singing of conquistadors with the Stray Gators instead of Crazy Horse. The album reaches its pinnacle on the magnificent ‘The Bridge’ which has a whiff of Dolly Parton and Bobbie Gentry to it as Ungerleider lays down possibly the best woman done wrong song we’ve heard in a long time.

The five bonus songs were originally sold on cassette at live shows in 1998 and they have Ungerleider singing unadorned versions of songs which made it to the album. Unlike many add ons to reissues, these are well worth having, not only to compare them with the finished versions, but as a raw demonstration of her talent. Overall, a welcome reissue and an excellent introduction to the world of Oh Susanna.

A welcome reissue of an album which speaks to today