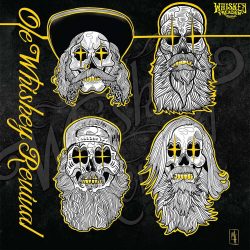 Who would have thought there was life in this old dog yet?  The days of Southern Rock, ramblin’ gamblin’ men, Capricorn Records and the South rising again seemed to be anchored firmly in the ’70s but here’s a début disc that displays the swagger and instrumental prowess that were pretty much its trademark. Formed five years ago by old school friends the band are, Alex Troegel (lead guitar and lead vocals), Trent Daugherty (guitar and vocals), Steve Hensley (Bass), Ryan Alexander (drums and percussion). John Garcia (guitar and vocals) and Kyle Roop (steel guitar) add assistance on this album. There was a little debate in the office about genre but this fits right in at the harder end of the Americana continuum for fans of the Allmans, Lynyrd Skynyrd and the like.

For once the PR comments get it right, describing Ole Whiskey Revival as, ‘Bourbon soaked rabble-rousers’, and a band that plays with considerable confidence; although it is their first recording it’s no surprise that they have been together as long as they have.  Rather than the typical riff-driven approach with hard to discern lyrics and instrumentation, this production brings some powerhouse singing right to the forefront and it’s great to hear the contributions of each instrument with some great fills and licks on guitar – aurally a real pleasure.

Whereas the sound might be classic rock then the lyrics are also unfortunately of similar vintage with stereotypes abounding.  It’s not that the songwriters don’t have a way with words – the tracks are well put together and the rhyming is clever and not as obvious as some.  However, women are presented as angels or devils and men somehow the victims of sex workers and with no will of their own.  Women are either untouchable or able to be touched by anyone.  Whiskey is the drink of choice and responsible for all kinds of poor behaviour.  Men are outlaws and able to dispense justice after a drink-sodden Saturday night. Partners are referred to as, ‘Hairy legged hippy chicks’, and love can be won, ‘One dollar at a time’. When a man gets. ‘Strung out like this’, he claims, ‘There ain’t nothing I can do’. The track, ‘Ramblin’, introduces us to a man so magnetic that, ‘There’s a girl in every town who’d sure like to get her hands on me’ (though to be fair there may be a variety of reasons for that, good and bad). And if you happen to meet him drunk in charge don’t worry it’s a, ‘Good thing that the road to Georgia is just one long straight line’.

It’s true, these are only characters in songs and there is nothing to say that the writers actually approve of this behaviour but it is a rather unrelenting picture and there is talent enough to consider some other topics and approaches.  There’s always that debate about what constitutes Americana, however, week after week what we are fortunate to see are admirable sensibilities and viewpoints elegantly and positively expressed – concerns for the planet, the dispossessed, the position of females in the world, the parlous state of domestic and international politics, the gap between rich and poor.  That’s part of what made New Country and Americana different – isn’t it?

There is one track that steps aside and tongue in cheek reasonably demands the right to be different – those that can’t hack it can, ‘Go Jump in a Creek’.  It’s also got a nice little twist in the tale.

And yet despite any concerns about the lyrics, it’s a hard challenge not to tap your feet and sing along. ‘Moonshine Melody’, could have dropped ready formed from, ‘Exile on Main Street’, and there are a number of Stones like snippets and reminders throughout the collection – there’s nothing up with that at all.

So good marks for the playing and singing, less so for the words.  If the lyrical content is not top of your list of concerns then this might be the album for you.  This is a good band and with an occasionally different lyrical focus they could be even better – and I admit it will be played again on the basis of the strengths that it does have.

About Gordon Sharpe 56 Articles
Music fan for more than 50 years and I think it gets better than ever - I love the Americana scene.