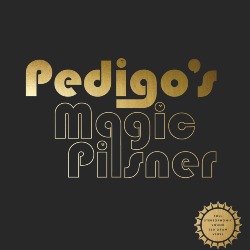 Pedigo’s Magic Pilsner’s self-titled album is an accomplished and heartfelt homage to Pedigo’s late father. From the title (inspired by his father’s terrible homebrew), to the themes of the songs (breakups, loss, the transient nature of life), it’s clear we’re in the middle of a deeply personal album.  Pedigo is Dallas singer/songwriter John Pedigo (The O’s) and this album was in response to his father’s battle with cancer. Written in part while his father was still alive, Pedigo has managed to produce an album that recognises that life can sometimes kick you down, but that there are always ways to find happiness.

This is an album packed with vignettes that make up the cycle of life. In ‘The Comedian’ we hear the tale of an unfaithful, travelling comic who returns home to find his girlfriend in bed with someone else. Pedigo is having fun with lyrics here adding the colloquial “is this thing on?” as part of the refrain. ‘Garage Sale’ is an upbeat take on divorce with a catchy chorus and a rich melody packed full of jangly piano and a full band sound.

Pedigo’s songwriting and voice has a hint of Conor Oberst to it. But while Oberst often veers into bleakness, Pedigo has a clearer edge to his vocals. On “A Comic’s Last Stand” he’s presenting the idea that many of us are just waiting to die – but that’s not him: “although you live one foot in the grave, I don’t roll that way”. It’s a  stand out track with lap steel and harmonica.

Country-tinged ‘No Better Than You’ comes alive with dixieland horns and rich guitar riffs. ‘Wet the Line’ is a rollicking tune (think The Felice Brothers’ ‘Frankie’s Gun’) packed with honky tonk piano, accordion and probably a healthy swig of that pilsner. It’s a positive message mid-album – we’re all in charge of our own destiny.

This is very much a celebration of not just his father’s life, but of life in general. Album opener ‘Orion’ sums it up with the lyric “sometimes it’s right to say goodbye” and you get the sense that Pedigo is okay with that.

A melodic piece of americana that celebrates life.