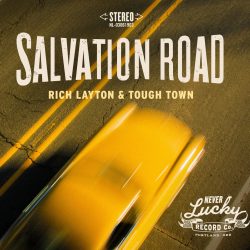 On the original road to salvation, St. Paul suggests that the wages of sin are death. Rich Layton has avoided that outcome in a lifetime in the rock’n’roll trenches, but has taken a few knocks along the way, and now brings us his ‘Salvation Road’. The title track is a gospel-infused shot at rock’n’roll redemption, which Layton says he performs on Saturday night in the bars and Sunday morning in the church. As he says “Perseverance has been the story of my life, especially where music is concerned”.

As far back as 1985 he was named as one of Texas’ Harmonica Tornados, was dubbed “The Duke of Juke”, and was Houston’s premier harp player (and best dressed musician). After a quarter century of being sideman de jour to anyone on the Texas scene, he married and upped to Portland, where he released his first album of original material. But as momentum was building, disaster for a musician struck when his hearing went, and he ended 2012 having major inner ear surgery. He now returns after a long ordeal with a point to prove about his perseverance, and lead off track ‘Live to Rock (Another Day)’ is an intensely personal song about being determined to make it back on stage “dedicated to all those who hold onto a dream – not because of fame and fortune, but because it’s the thing that gives us our deepest sense of self.” It’s a hard driving, gloriously guitar crunching track, with lashings of harmonica -as most of these tracks are- where Layton growls “give me three chords, I’ll tell you the true story”.

The rest of the album gathers all the Deep South traits, confidently produced and classily played, so we have laconic blues, zydeco, soulful duets, slow chugs, two-step, a train song, swampadelica etc. Whilst live, this set and band would be an absolute stormer, on record it is not particularly distinctive, emphasised by the last track, Goffin & King’s ‘Take A Giant Step’, which they originally wrote for The Monkees, and is the best song on the album. Layton overall, though, shows us his class, and is well on the way to his salvation, having a great time exhibiting his redemption.