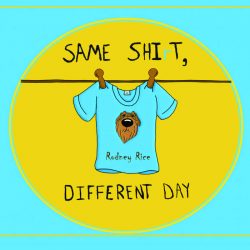 You’ve just got to look at the cover of this CD to realise that Rodney Rice is a man with a sense of humour, ‘SAME SHIrT DIFFERENT DAY‘,  indeed.  It’s been said that Rice wears his heart on his sleeve and his tongue in his cheek which seems an accurate assessment. Rice is a man who seems to have lived a little, in a variety of jobs, from oil-fields to itinerant kayak instructor and a college education in geology.  His was a coal community upbringing in West Virginia with a working man’s take on life, via Texas, to his current home in Colorado.  Whilst he may have blue-collar sympathies it can’t be said that group of Americans is homogeneous. Rice represents that unhappy sub-group who recognise that they have currently and historically been shafted by the political and industrial elite – typified by Mr Trump.  The history of coal mining is one of the bitterest episodes of owner/worker conflict in American history as evidenced in, ‘Company Town’, which is reflective of the 2010 Upper Big Branch mining disaster:

‘Mister Massey what have you done / you took fathers, brothers and sons / Wives are crying forever alone / waiting on husbands who’ll never be home / We take pride in all that we do / gave our lives to put the lights on for you / so Hollywood you don’t understand / all the troubles of a coal mining man’.

Rice relates this song to one by his hero John Prine, who wrote of similar issues in his 1971 song, ‘Paradise’.  Rice’s first viewing of Prine, in his pre-teenage years, left him reflecting on the fact that though he and his sister sat in the back row, ‘You never felt like you were in the last row at a John Prine show’.  He has striven to emulate this feeling of intimacy in his own career.  Certainly, the warmth of his recorded voice achieves that.

The opening track, ‘Aint Got a Dollar’, unequivocally according to Rice, ‘Gives the middle finger’ to the current administration, though for all his faults Trump has been less of a war-monger than some – preferring to talk big and avoid discussion of his own military service.  Rice gives us his take on the life of a service-man:

‘I was too young to drink but old enough to vote / When they sent me cross the ocean on a big ole boat / Had me fighting for freedom in an endless war / Then they bring me back and home ain’t home no more’. As President Eisenhower warned and Rice re-iterates: ‘Ain’t no money in peace like there is in a war’.

It’s an opening track that starts with a crunch of guitars, a gritty vocal, catchy riff and a slide solo, all sounding spot on.  It’s something of a surprise that the album then leaves that path for a lighter sound of almost classic country with a little honky-tonk influence for good measure.  That opening track does pack a punch and leave you wanting at least a bit more; the rest of the album sets a pace and tone that could benefit at times from a little of that kind of brio.

The remaining tracks cover an array of subjects, ‘Hard Life’, describing just that.  ‘Free at Last’, ‘Can’t Get Over Her’, ‘Walk across Texas’, ‘Right to be Wrong’, and, ‘River Runs Backwards’, all voice aspects of relationships good, bad, indifferent and with the potential for fault on all sides.  ‘Right to be Wrong’, includes memorable images – something which Rice achieves consistently in his lyrics,

‘I know this house looks empty but believe me, it’s full of doubt / I can’t help but wonder sometimes maybe we could have worked it out / But nights that get lonely in this cheap inflatable double-sized bed / Me and the old dog and some books I still ain’t read’.

‘Pillage and Plunder’, considers Green and ecological issues, ‘Middle Managed Blues’, is a tongue in cheek tale of a less than favourable work-based review.   The final track, ‘Don’t Look Back’, is another, ‘what it says on the tin’, track and along with, ‘River Runs Backwards’, contains one of the few guitar solos on the album.  It presents, yet again, an eternal wanderer’s apologies to his partner. I am sure she is pleased to know where she stands.

‘Till the rivers all run backwards And the oceans go dry / I’m going to love you forever girl But I’m staying just for tonight’.  Off you pop then.

The final subject to be covered in, ‘Memories of Our Youth’, ponders the differences between parents – presumably the authors:

‘I brought you in this world so I can take you out / settle it down before I give you something to cry about / you kids think you learned it all in the few years you’ve spent in school / you might think you walk on water now but remember shit floats too’.

Charm personified, but unsurprisingly and thankfully Mum comes up trumps with some more child-friendly advice:

‘Remember those you’re passing going up / you gonna pass them coming down / always do what’s right / because what you do comes back around / keep looking on the bright side of every rainy day / don’t forget your prayers at night’.

Rice has the voice and generally exhibits the writing skills to make this an interesting and enjoyable second album.  The opening track stands above the rest of the collection in terms of its immediacy and bite. Sometimes the remainder can settle into aural similarity, though the horns on, ‘Company Town‘, do go down well.  All in all though, a solid album.

Topics of the day considered by a travelled singer/songwriter