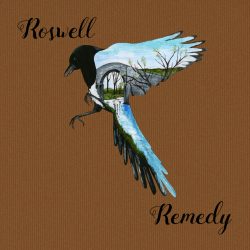 Jasmine Watkiss and Zoe Wren are Roswell, a folk duo whose voices combine to create a seamless flow of rich, harmonic beauty. Their debut EP, ‘Remedy,’ highlights those harmonies, sounding as telepathic as siblings who actually get along. As intricate and seamless as their voices are together, it’s even more astonishing to realize they’ve only been at this since early 2018, when Wren, a self-described “London Underground Busker” teamed up with Watkiss and started getting booked at various festivals, eventually winning the 2018 Purbeck Rising Award from the Purbeck Valley Folk Fest.

With their first EP, Roswell delivers five acoustic-based folk ballads fueled by those strong harmonies, along with Wren’s guitar, Watkiss’s violin, occasional handclaps, and various percussion. The opening ‘London Town’ traces the lives of four Londoners working and making their way through life in the city, each in the best way they know how. By its end, a glimmer of hope rises from the bleak scenes the verses reveal.

The rest of the EP’s lyrics investigate the various emotions love and relationships cause while the music never strays from a comfortable folk foundation, though they’re coloured with touches of blues, country, and light soul, peaking with the closing kiss-off, ‘Cry Wolf.’ Though nothing groundbreaking or revelatory will be found here, ‘Remedy’ sounds pleasant enough while it’s playing.

The strength and reassurance of friendship is detailed in the EP’s title track as they sing, “my heart’s broken clean in two / but each half don’t ache so fierce the minute I sit down here with you,” proving that a strong bond can weather any storm – and sound just fine while doing it.