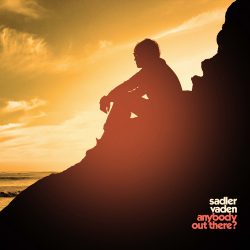 Sadler Vaden is best known as lead guitarist and vocalist in Jason Isbell’s 400 Unit. He said recently, “I live and breathe it. And I think I’m pretty good at it. I just love rock and roll”. And that is about all you need to know about his second solo album ‘Anybody Out There’. Before joining Isbell’s outfit in 2013 Vaden was in the uncompromising Drivin’ N Cryin’. But having been in the music biz for nearly two decades he now seeks a more human connection in our technology-obsessed world. Vaden’s influences come through loud and clear; Neil Young, The Who, Joe Walsh and most noticeably, Tom Petty.

Vaden is on familiar territory with the pacy rockers that match his 400 Unit role. ‘Next to You’ opens with the knockout riff of an Isbell show. The title track is also the album’s anthem, a brooding southern rock call that highlights Vaden’s undeniable lead guitarist skills. Co-written with Aaron Lee Tasjan ‘Peace and Harmony’ brings some George Harrison to Vaden’s view of today’s America, “Everybody’s screaming, everybody’s fighting/got to give it up… don’t you want to try a little peace and harmony?”

The softer, melodic songs introduce a more reflective Vaden. ‘Good Man’ is a muse on where he sees himself now and his future. ‘Be Here Right Now’ brings out the harmonies and sharp crescendos of early Jayhawks. Petty dominates  ‘Curtain Call’ from the gentle vocal intro to “I won’t back down, it’s my curtain call now”, a fitting tribute to his hero. The jangling runs of ‘Tried and True’ combine both Petty and McGuinn.

There is no denying Vaden’s ability as a rock guitarist and producer. Perhaps in a third solo record he might further explore his melodic thoughtful side.