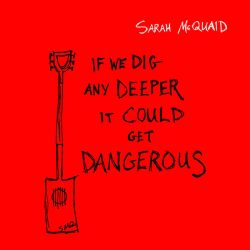 The cover of her fifth album shows a guitar morphed into a spade. Whilst Woody Guthrie wrote “This Machine Kills Fascists” on his guitar, Sarah McQuaid may as well have put “This Machine Kills Fracking” on hers. The title track opens with McQuaid warning her son not to go too deep in the garden with his shovel, but swiftly moves to ‘Splitting cracks in the rock to free the power inside’. If this is the most overtly political statement on the album, plenty more tracks are connected to the earth, and the moon.

‘Cot Valley’ references child labour in the old tin mines of her adopted Cornwall home. ‘Break Me Down’ essentially requests that her body be composted, and ‘Slow Decay’ refers to the lead up to the need for a funeral plan. Poetic and intimately beautiful it may be, but this album is scarcely Americana. It is folk, and of a very English type, which considering McQuaid was born in Madrid and raised in Chicago is quite some achievement. To compound this feel, the album is produced by Michael Chapman, but sparely and unobtrusively, with an occasional touch of his guitar. McQuaid constantly uses her usual DADGAD tuning, which leaves songs floating in neither major or minor keys and adds to the slight netherworld feeling throughout the album. It certainly deepens the sense of her cover of ‘Forever Autumn’ . Special credit needs to go to her cat Nightshade for his vocal contributions to ‘One Sparrow’. More songs could do with the odd miaow.