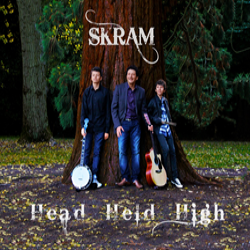 Oh dear. I’m sure I’m not the only reviewer who sighed when catching sight of the PR sheet accompanying this album which describes Skram as “an Americana style Hypno Folk Rock family band.” The hypno bit is due no doubt to guitarist and singer Darren Marks’ day job as a hypnotherapist and sure enough it is a family band with dad Darren accompanied by his sons Adam (on banjo) and Ben (on drums). Ben is 13, Adam a bit older I think. A commendable idea to showcase the family talents no doubt but the problem here is that both boys are still beginners and really don’t get into any kind of groove at all throughout the album. The banjo just plinks at times and the drums (a full kit that is definitely out of step with the folk rock theme) are more suitable for a pub covers band.

I’m truly sorry to write that as I was hoping that the pair would pass muster at least (and at least they can play and with practice and experience they might be the next Mumfords). However, dad Darren also lets the side down as his vocals are unremarkable while his songs are primarily folk rock numbers similar to the works of many 70’s folk rock bands while several of his lyrics offer a bland guide to wellbeing. A cover of Earl Scruggs’ Nashville Blues is reasonable enough and the opening song, The Acorn, has a fairly nice easy going pace to it. However they completely lose their footing on their cover of Skip Holmes’ The Flying Dutchman while Appalachian Rain (by The Seldom Scene) has never thundered with so much misplaced percussion.

It’s a hard life but these guys sent the album in for a review and it would be dishonest of AUK to recommend it without the above caveats. I can’t find a sound clip to place at the end but you can watch a video here. I’m sure as the boys progress they’ll find their own strengths.