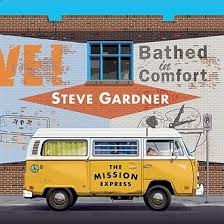 Chuck Prophet recently tweeted a comment from his buddy and console-maestro, Matt Winegar, who, at soundcheck while they were balancing the EQ before a gig, advised Chuck that, ‘By the time we get forty or fifty beards in here, it’s really going to change the sound.’ A few months before this wonderful post, Chuck received an unsolicited request from fan boy, Yorkshire man, singer and music dabbler, Steve Gardner – not to be confused with the American musician, Mississippi-based Rambling Steve Gardner.

Steve had sent a hopeful missive to Chuck with a demo and some lyrics he had written for a new song, wondering if Chuck might be up for producing a four track EP. Not believing he had a snowball in hell’s chance of the great man acceding to his request, Gardner howled on receipt of Prophet’s friendly reply, which said he really liked what he’d heard. “I’m up for anything,” wrote Chuck, “This is the type of meat I gobble up!”

Within a few weeks, Gardner was just a few streets away from the City Lights bookshop in San Francisco, location of one of Allen Ginsberg’s early performances of Howl, tucked away in the studio with Chuck and some of his amigo’s from the Mission Express, namely Vicente Rodriguez, Kevin T White and James DePrato.

Due to the camaraderie and fun vibe that permeated their sessions, their collective creative juices were flowing so heavily that they actually recorded six tracks before the tape op mopped them up. “Hell, Steve, we’re goddamn only four tracks short of an album, my brother from another mother!” exclaimed Chuck; before suggesting that Mr. Gardner go back to Blighty, write a few more songs and then come back to the streets of San Francisco and before they could shout “Karl Malden” they would have completed Bathed in Comfort. And that is precisely what they did.

With a melange of styles that are more indie-schmindi than folk-rootsy, or country-wontry, and which Gardner describes as “a California rock album”, his voice at times sounds like Richard Butler from the Psychedelic Furs, or Robyn Hitchcock. He says that the album is “really all about love and the comfort we get from people that love and support us. Even though, admittedly, that is mostly expressed in its absence.”

Take Me Down is a noirish tale of doom, despair and murder, but it’s also damn funky and has a mad and delightful synth line that protrudes in a crazed but beautiful way near the end of the song. Prophet’s wife Stephanie Finch provides scintillating backing vocals to this and several other tracks on the album.

The acoustic version of their paean to TV show 3rd Rock from the Sun, The Day The Aliens Saved The World has some nice dobro, while the ‘rock’ version features some wicked guitar from James DePrato, whose slide contribution to rocking-out banjo-driven opener Rosalie is also delightful. To get the right vibe for the Alien song, Prophet played Gardner a selection of spoken word tracks by John Cooper Clarke “set to futuristic and challenging soundtracks.” They decided that the ‘rock’ version with DePrato’s terrific R’n’B riffage reminded them of Dr. Feelgood.

Gardner wrote a fascinating contemporaneous blog while he was in San Francisco which charts his disbelief, wonder and absolute, unparalleled joy at finding himself in the studio with his heroes. “I had the privilege of watching the Chuck and Matt show, which would be a cult favourite on late night TV. The rock ‘n roll encyclopaedia volume 1 and 2, right there in the room. If you can think of a song recorded in the last 40 years, 50 even, that neither of them has heard of, you get a prize. If they’ve heard of it but don’t know who produced it, what amps were used, or the middle name of the drummer, you get a consolation prize.”

What’s heartwarming is Steve’s love and admiration for these generous musicians, likewise the guys for their acceptance and the encouragement they’ve shown Steve. “These people know, understand and have been in contact with pretty much everything in popular music. It was a ridiculous idea for me to reach out to them to help with my very first meaningful recording. But I hit the jackpot.”

You certainly did, Steve. And ergo, so did we. Bathed in Comfort is a sterling and original debut; akin to lying in warm water enjoying the fragrance of lavender, bergamot, mandarin, sweet orange and geranium. Thank goodness that Steve wasn’t backwards in coming forward when he decided to approach Mr. Prophet. Let’s hope this album is the first of many!