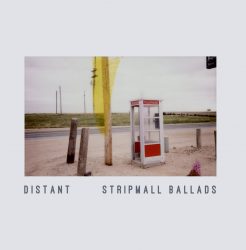 Now, these are not the happiest of times, obviously, but why do so many new albums coming from singer/songwriters have to be so relentlessly miserable? Even a miserable song with a jaunty tune would be a welcome departure but so many of the new songs we hear are slow, minor-key moans about the trials of life. Surely someone out there must be having some fun? At least occasionally!

What you’ll probably surmise from the above is that ‘Distant’, the new album from Phillips Saylor Wisor, aka Stripmall Ballads (and that’s exactly what these songs are),  is a little on the downbeat side and you wouldn’t be far wrong. The album starts off with ‘Susan at the Crossroads’, a glacial paced ballad that sets the tone for the album – “I don’t care about your hustle / I’m only here for a short time / To be fair, I did whistle / But I haven’t got a dime/ I am going, going to reap what I have sowed / I am waiting for Susan at the crossroads”. This is followed by the even slower if that were possible, ‘Juice and Sage’ along with its own fun-filled lyric – “I’ll lodge myself in a very dark cave / with walls made of sharp obsidian / my skin it will roughen and I will grow old / and no one will come to see me”. It’s fair to say you’re not going to be putting this on the playlist the next time you want to lighten the mood around the house!

Now, having said all that, this is a good album. Miserable, but good. Based around a summer road trip that started with a lift from the aforementioned Susan, the songs chart Wisor’s encounters and experiences along the way. While it doesn’t sound like too many of these encounters were particularly enjoyable, they clearly provided Wisor with some powerful inspiration for his songs – these are all very well written and well constructed, though that’s not surprising considering Phillips Saylor Wisor’s credentials as a musician. He plays a range of instruments and is a sought after banjo teacher, as well as teaching ukulele and guitar and he has opened for and toured with a variety of acts including The Be Good Tanyas, The Old 97’s, Sarah Harmer and many others, both solo and as part of the well-received old-time duo, the Shiftless Rounders and bluegrass band King Wilkie.

For this album he recruited the musical talents of Indie Rock band Yellow Paper Planes to back him and they lend a strong presence to the album, providing a brooding, dark backing to these moody songs. By all accounts, Wisor seems drawn to the simpler roots of folk-based music, having poured over Library of Congress field recordings as a young teenager and learnt old-style traditional banjo tunes during his time on the folk circuit. There’s a refreshing simplicity and honesty about this album; Yes, the tunes are slow tempo and the lyrics bleak but the songs are good and Wisor’s use of language is impressive as he delivers his tales of the road – “Keep the motor running in case the police come/ you’re purring and a humming and I’m almost done/ make more money if you know my name/ they’ll play you for a honey if you’re in the game/ it stops being funny when the trick’s the same/ (‘Pull Over Johnny’).

It’s hard to see what the future holds for Phillips Saylor Wisor and his Stripmall Ballads. I like dark, brooding material so there was much about this album to be enjoyed – but the plodding tempos and unrelenting gloom do become a bit difficult to take for even the most dedicated of cynics. Listening to some of this artist’s previous recordings they don’t seem so bleak. Yes, he favours darker ballads but they’re not all at a funereal pace and, every so often, little chinks of light shine through, and that’s what’s lacking on this album – the hint of light that, just occasionally, parts the shadows. If he’s to find a wider audience for his music it might be time to find the half-full part of the glass!