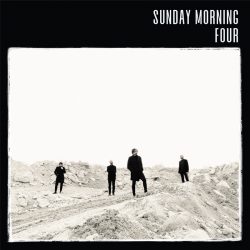 Following on from the release of Sicilian Fabrizio Cammarata’s critically acclaimed ‘Lights’, the Italian Americana (is that a coffee?) theme is continued by Sunday Morning, who returned with a new line-up in 2015 after eight years in the wilderness. Andrea Cola is back again with a brand new sound to go with the updated personnel. A little older, a little wiser, a new direction – and it sounds like rebirth.

‘Four’ is the creation in question, a ten track opus bursting with Southern soul and imagery, casting shimmering mirages a la Son Volt and Lambchop. It’s lo-fi in feel minus the imperfections, with abstract lyrics and an illusion of thin production. But the spaces that on the face of it are engineered into these ten tracks are not real. A production trick? This can perhaps be attributed at least in part to two major events in Cola’s recent artistic development. The first is working with master of atmospherics Daniel Lanois, iconic producer of Eno, Dylan, Young… the list goes on. The second is New Orleans’ famous Esplanade Studios, which occupies a 1920s church and is the location of Cola’s recent reconnection with his inspiration while out Stateside interning at those legendary studios. Perhaps this contributed to the celestial quality of the recording.

The missing years have brought out the melancholy side of Cola and opening track and new video ‘If I Go’ eases the listener gently into the album, pleading, “If I go to the ground/Will you heal me there”. Highlights include the piano-led ‘Dreamer’, out of which emerges a southern rock style guitar solo which has the blues dripping from every sweetly struck string. ‘Waste My Time’ has a particularly destructive narrative regarding a relationship gone bad. The last track ‘Prove It’ is an expansive tragedy about suicide. The swirling, echo-laden guitars react passionately to the monotone piano chords and certainly proves that when these newly acquired production skills combine with Cola’s songwriting at its best, the most hardened critic can be moved to emotion.

In conclusion, ‘Four’ has many qualities. It is their fourth album in total (clue in the album title) and three albums since Andrea Cola reformed Sunday Morning with a new line up. They are maturing into a well-oiled machine, capable of albums which harbour first-class production values and arrangements. The lyrics are still a little sketchy in places, perhaps lost somewhere in translation and not all tracks are as strong as those mentioned, however, when Sunday Morning get it right, they get it just right.

Renaissance of Italio-Americana in full swing