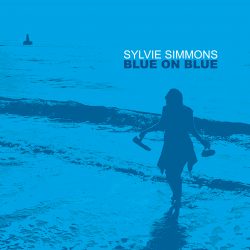 If Sylvie Simmons’ name is familiar it is probably as a writer for Mojo, The Guardian and of several books, including a particularly good biography of Leonard Cohen. Her press release states rather oddly that: “When she was in her fifties, Simmons came out as a singer-songwriter.” ‘Blue on Blue’ is her second album and like her debut has Howe Gelb producing and playing keyboards and guitar, with other members of Giant Sand in tow.

Simmons’ voice can at first sound like a delicate fragile thing, struggling to make itself heard over the sparse backing, mostly her own Ukulele, but with a quiet electric piano and softly picked guitar added every so often. When an electric guitar joins in on ‘Waiting for the Shadows to Fall’ it seems almost intrusive. Neil Young would have been pleased to write ‘Waiting for the Shadows to Fall’. Opening song ‘Keep Dancing’ is the most uptempo here and one of the best. The songs work best when they don’t tax Simmons’ slightly limited vocal range. An accident during the making of this album meant her left hand was so damaged as to be unable to play some of the songs planned for it. ‘Carey’s Song’ a short simple piece, was one that was written in the aftermath, and knowing that you can tell that some of the more melancholy moments reflect a feeling of rebuilding her life and her music. That the quality of the writing, particularly the words, doesn’t dip is a huge credit to Simmons and Gelb. The most successful songs are those with a bit more substance to the music, guitar, string washes, or on ‘Stay Awhile’ pump organ.

She wears her influences lightly. It comes as no surprise that Simmons has also written biographies of Neil Young and Serge Gainsbourg. There’s an unmistakeably French feel at times; you can imagine Francoise Hardy singing some of these songs. Leonard Cohen and Marianne Faithfull are other reference points. At times she picks keys that she struggles to sing in, as on ‘Not in Love’, however, it actually contributes to the atmosphere of ‘Blue on Blue’. It would be interesting to hear her do some duets. Emmylou Harris springs to mind. In fact, closer ‘1000 Years Before I Met You’ is a duet with Gelb and is clearly Simmons putting her health problems behind her: “Help me say goodbye to these blues”.

This album is what a lazy writer would call “a grower”.  It takes a good few plays for its charms to work their way into your mind. Once it’s there, however, you will find yourself playing it whenever the mood for some quiet music takes you. If this review had been written a few weeks ago it would probably have rated a much lower score as the similarity of sound and pace of most of the songs can make it feel bland. But there’s no need to sound apologetic about her music: Simmons is a singer-songwriter and a fine one at that.

Takes time for its charms to work their magic, but a fine album that is worth the effort