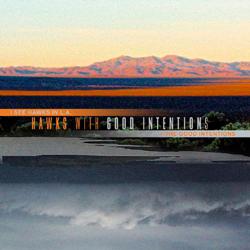 California’s I See Hawks In L.A. and Liverpool’s Good Intentions met and became friends at a house concert in California back in 2012. Since then, the bands have shared stages in the States and here in the UK and along the way they began writing some songs together, the first fruits of their joint effort displayed on the Hawks’ last album, ‘Live And Never Learn‘, which had two songs co-written with Peter Davies of Good Intentions. Bouncing emails and mp3 files across the Atlantic they eventually came up with the ten songs on display here, sections recorded in L.A. and Liverpool with each of the bands’ contributions stitched together so well that the join is never seen. As it says on the sleeve, “Gleaming technology serving acoustic guitars and down home harmonies.” END_OF_DOCUMENT_TOKEN_TO_BE_REPLACED