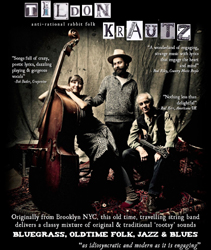 The ever so slightly eccentric Tildon Krautz, a French based band who offer bluegrass, folk, jazz and blues all wrapped up (on their albums) in homemade collages and artwork that one reviewer likened to “Hieronymous Bosch meets Monty Python in Yellow Submarine land,” embark on a lengthy schedule of intimate shows starting on June 7th. Americana UK rated their 2014 album, No. 2 or Blumen Schmarren, 8/10 commenting that band leader Gregg Weiss “manages to write songs that sound as old as the hills.” END_OF_DOCUMENT_TOKEN_TO_BE_REPLACED