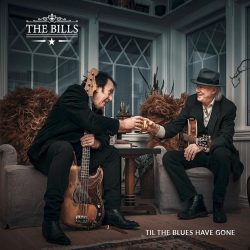 On ‘Keeping the Blues Alive’ Bill Booth and Bill Troiani – who collectively make up The Bills – sing about heartbreak keeping the genre going, and indeed it’s a passion of the blues that comes through loud and clear on this release. The duo are two veteran musicians who have been living in (the surprisingly Americana rich) Norway for years, but it’s only now that they have finally decided to solidify themselves as a band by hitting the recording studio and producing their first album together.

“Light is on but there’s no one home / I sit alone like some sad song,” sings Booth on the first track, and while it’s mellow and bluesy, his vocals remain upbeat and optimistic in tone. Troiani takes over lead vocals on the second verse, maintaining a similarly easy flowing tone as his partner. On ‘Last Chance to Hurt Me’ the pair flex their harmony muscles further on the opening lines: “Last chance to hurt me / Last chance to put me down / Last chance to hurt me / ‘Cause I ain’t sticking ‘round”. ‘Good Lord Done Good’ has even more of deep southern blues in its veins than the previous tracks, something that’s reflected both musically and lyrically (“Sunday morning and the church bells ring / Songs of heaven and all sacred things / Thru the door blows an evil wind / Burning hellfire as the shots begin”).

‘Slipping Through the Cracks’ is welcomingly rich with Booth and Troiani’s harmonies, their voices blending effortlessly together with a practised ease, giving even the more repetitive lyrics texture. ‘Asking For More’ strikes a jaunty tone, even when the words hint at dissatisfaction from a female point of view (“She found a man every woman’s dream / She loved the attention /  And missed love’s mysteries / When the dream became a bore / She’s asking for more”). ‘Driving Rain’, another track hitting a gleeful note, is a standout with its hints of surf rock amongst words of taking chances no matter their outcome: “We all been there once or twice / Rotten apples sugar and spice / Train is leaving one last call / Didn’t make it after all”. ‘Road is Long’ is heavier on folk influences than the other songs, and the pairs vocals mesh well with the airier sound.

The one song in the mix that wasn’t written by either of the duo is a cover of the 1965 Son House song ‘Grinnin’ in Your Face’, and while it’s noticeably heavier on the soul and lighter on the blues than the rest of the tracks, it still fits in comfortably well with the material as a whole. ‘Didn’t Know What I Had’ is the final track, and it takes on regret over a failed relationship, the lyrics delivered in fittingly slow, gloomy drawl.

While they aren’t doing much to reinvent the gentle folkish-blues they peddle, The Bills have produced a pleasant record for any fan of the genre to enjoy – and listening to it should help keep those proverbial blues firmly at bay.

A solid listen for any blues fan, but it’s unlikely to win over any uninitiated listeners

About Helen Jones 40 Articles
North West based lover of country and Americana.
Website