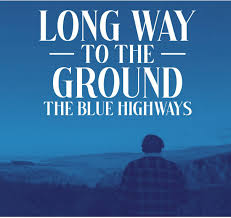 The Blue Highways are the three Lury brothers Callum, Theo and Jack along with bass guitarist Peter Dixon. London based, the band have already made waves on the Americana scene supporting the likes of Iris Dement, Bennett Wilson Poole and Robert Vincent as well as the kudos of recording a session for Bob Harris’s ‘Under the Appletree’ series.

‘Long Way to The Ground’ is the band’s debut album and, for a debut, there is a confidence that belies their youth and inexperience. This is no tentative start, no holding back. The band have created a big sound, the size and scale of the arrangements bolstered on a number of tracks by the trumpet and trombone, mandolin and pedal steel provided by additional instrumentalists.

Callum’s piano plays a significant part in this big sound and the opening couple of tracks give a big hint at what is to follow. ‘Teardrops in a Storm’ starts with a quiet, melodic piano and mournful pedal steel before the song builds into that full-on multi-layered sound, complete with bold brass, that is the thread that runs through the album. ‘Blood Off Your Hands’ has the piano morphing into bluesy mode mixing with electric guitar hook in the chorus.

All this big production comes within the context of narrative-driven songwriting from Callum. These are no derivative efforts. This songwriter clearly has stories to tell and he fairly belts them out in the manner of a Springsteen at his rocky and raunchiest best so it may or may not be coincidence that he has written ‘Cover Me’, a song that he acknowledges owes a debt to Bruce’s track of the same name. Ironically this is one of the more restrained songs on the album, a love song that benefits from the more straight forward arrangement.

Callum himself has confessed that the stories contained within the songs can, at times, get lost within the scale of the arrangements and indeed, that is true at times on the album. However, rather like the aforementioned Springsteen, the songs do warrant attention to the lyrics and it would be a pity if the quality of the songwriting was overshadowed by the sheer vitality of the music in what is a very worthy and promising debut.

A big sound and intelligent songwriting - a debut that promises much